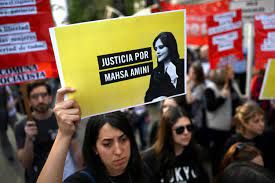 Iran has threatened to "take action" against celebrities who have in recent days supported the demonstrations sparked by the death in custody of Mahsa Amini.
Iran has been shaken by a wave of protests, which have claimed the lives of scores of people, following the death of the 22-year-old Kurdish woman on 16 September days after her arrest for violating the country's strict dress code.
ISNA news agency yesterday quoted Tehran Governor Mohsen Mansouri as saying: "We will take action against celebrities who contributed to fueling the riots."
Iranian athletes, actors and film directors have publicly supported the protest movement, calling on the authorities to listen to the people's demands.
On Sunday, two-time Oscar-winning Iranian director Asghar Farhadi urged people around the world to "stand in solidarity" with the protesters.
In a video posted on Instagram, Farhadi said: "I call on all artists, filmmakers, intellectuals and civil rights activists around the world (…) all those who believe in human dignity and freedom, to express their solidarity with the strong and brave women and men of Iran."
For his part, the former national football team player, Ali Karimi, has repeatedly published messages of support for the protests on Instagram and Twitter.
Earlier this week, Iranian Sardar Azmoun, who plays for German Bayer Leverkusen club, said he could not remain silent in the face of the deaths caused by the security crackdown.
"It cannot be erased from our consciences. Shame on you," he said on social media.