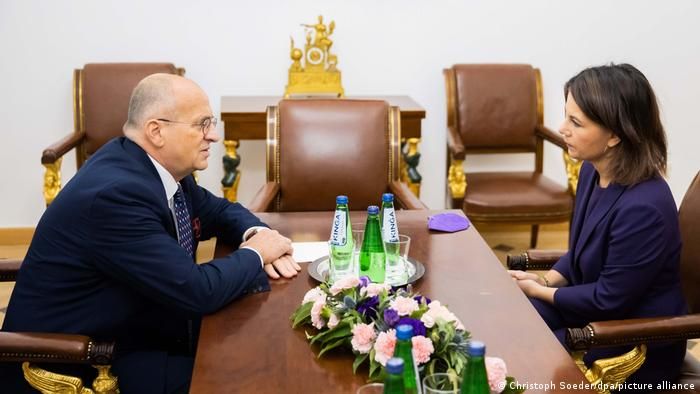 German Foreign Minister Annalena Baerbock faced a delicate meeting on Tuesday on the second day of her visit to Poland., DW reports.

A day earlier, her Polish counterpart Zbigniew Rau had signed an official request to start World War II reparation talks to be handed to the German Foreign Office.

Baerbock said during a joint news conference that she had discussed the diplomatic note with Rau in person and reiterated the German government's position that the matter was settled.

For his part, Rau said Poland was counting on good cooperation with the German government on resolving the issue, and that he was sure Berlin's position on the matter would evolve.

What is Poland demanding?

Included in the note was a passage saying Germany and Poland "should take immediate steps towards a permanent, comprehensive and final legal and material settlement of the consequences of German aggression and occupation from 1939 to 1945."

The letter requested a payment of about $1.3 trillion ($1.28 trillion) for the damage incurred by occupying Nazi German forces during the Second World War.

Berlin opposes the demand for reparations. It claims the Two-plus-Four Treaty of 1990, on the foreign policy consequences of German unification, settled the issue.

Ahead of the trip, Baerbock did touch on the issue of reparations saying Germany and Poland had a "responsibility to preserve the trust we have built together over the past 30 years.''

She stressed that "this includes that coming to terms with and remembering the immeasurable suffering that Germany brought upon the people of Poland."

What else was on the agenda?

Also part of the plan for Baerbock's trip is the Warsaw Security Forum, where she was due to take part in a discussion about the implications of Russia's war in Ukraine.

Baerbock arrived in Warsaw on Monday for a ceremony held by the German Embassy there to mark the Day of German Unity.

The focus of her speech at the event was Germany's support for Ukraine and more widely for Eastern Europe.

Baerbock said Poland, where "Solidarity" protests against Communism became a mass movement in the 1980s, was a vital partner for Germany's security.

She said the end of Communism — highlighted by the fall of the Berlin Wall in 1989 — was significantly inspired by the Solidarity movement.

The reunification of Germany in 1990, she said, would have been "inconceivable without the courageous Poles who resolutely went on strike, fought and demonstrated for freedom and genuine democratic co-determination."