Türkiye condemns US presidential order on its counter-terror operation in northern Syria - ednews.net

There's a Giant Magma Plume on Mars, Bulging the Surface out Across a Vast Region - VIDEO
Read: 241 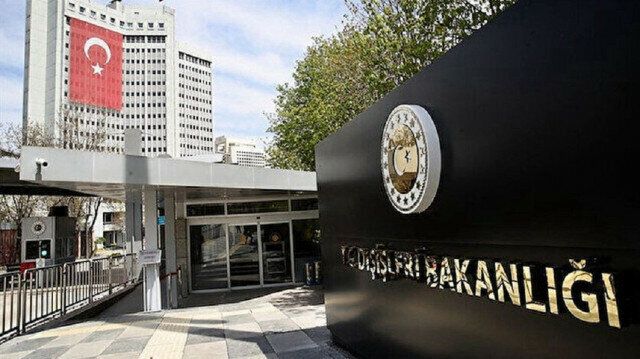 Türkiye on Thursday lashed out on the US for renewing an executive order that makes “baseless” claims against a Turkish counter-terror operation in northern Syria, across the Turkish borderç Edneüs reports citing Yeni Safak.

"The US Executive Order being issued since October 2019 under the title of 'National Emergency with Respect to the Situation in and in Relation to Syria' is identically renewed on October 12, 2022. We condemn this Order which contains baseless allegations and accusations against our country," said a Foreign Ministry statement.

Saying that Operation Peace Spring in northern Syria – an area not controlled by the Bashar al-Assad regime – is being carried out by Turkish forces to eliminate terrorist threats from Syrian territory and protect border security, the ministry called the allegations in the Order "unfounded."

"Operation Peace Spring, carried out on the basis of the right of self-defense in accordance with Article 51 of the UN Charter and relevant resolutions of the UN Security Council on the fight against terrorism, has provided an environment of peace and stability in the region," said the ministry.

It further stressed that Türkiye's military operation in northern Syria "ensured the removal of PKK/YPG and DEASH terrorist organizations from the areas of operation and contributed to the preservation of territorial integrity of Syria."

"We expect the US to terminate its engagement with the terrorist organization PKK/YPG and to fulfill the provisions of the Joint Statement of 17 October 2019," it affirmed.

On Wednesday, the US announced the renewal of its Oct. 14, 2019 order on the situation in and in relation to Syria. The order accused Türkiye's military offensive in northern Syria of "undermining" the campaign against Daesh/ISIS terrorists and endangering civilians.

On the contrary, however, the operation and similar cross-border operations were launched to protect the border and locals from the threat arising from both Daesh/ISIS and the YPG/PKK terrorist groups.

In 2013, Türkiye became one of the first countries to declare Daesh/ISIS a terrorist group.

The country has since been attacked by the terror group multiple times, with over 300 people killed and hundreds more injured in at least 10 suicide bombings, seven bomb attacks, and four armed assaults.

In response, Türkiye launched operations at home and abroad to prevent further attacks, including several counter-terrorist operations such as Euphrates Shield (2016), Olive Branch (2018), and Peace Spring (2019).

In its more than 35-year terror campaign against Türkiye, the PKK – listed as a terrorist organization by Türkiye, the US and EU – has been responsible for the deaths of over 40,000 people, including women, children, and infants. The YPG is the PKK’s Syrian offshoot.