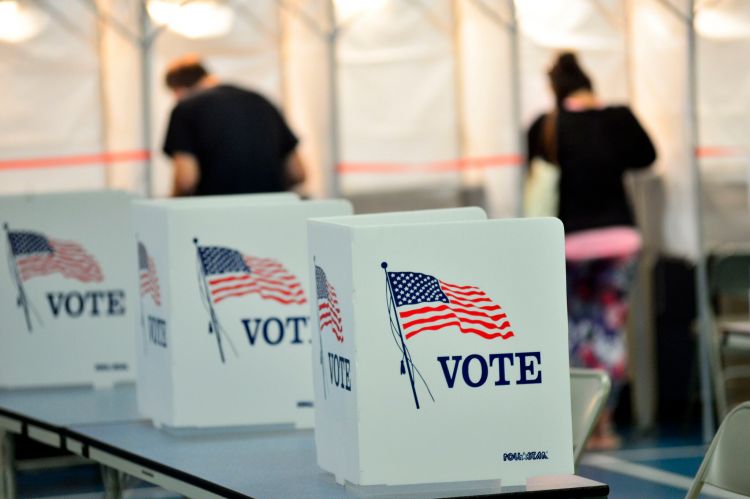 White House press secretary Karine Jean-Pierre said on Monday there are no 'specific, credible' election threats and that all Americans 'should feel safe going to the polls' on Tuesday.

She also reminded voters that results may not known right away. The results of the 2020 election were not known until almost two weeks after that election.

'Law enforcement has briefed us that there are no specific credible threats identified at this point. The President has been briefed on the threat environment,' she said at her daily press briefing.

'Americans should feel safe going to the polls,' she said.

She also consuled patience when it comes to knowing which party won control of the House and Senate.

'In modern elections, more and more ballots are being cast in early voting,' she said, noting that 'many states don't start counting those ballots until after the polls close on November 8.'

'We may not know all the winners of elections for a few days. It takes time to count all legitimate ballots in a legal and orderly manner. That's how this is supposed to work. And it's important for us to all be patient when while the votes are being counted.'

Fears of violence spread after Nancy Pelosi's husband Paul was attacked at their San Francisco home last week by a man looking for the speaker. She was not home at the time.

The Justice Department is sending monitors to 24 states to make sure federal voting laws are filed in Tuesday's election.

They will be enforcing the Voting Rights Act, along with the National Voter Registration Act and other statutes as some voting rights groups have raised concerns there could be intimidation at the ballot box.

But the elections also face non physical threats, including disinformation campaigns and allegations of vote fraud.

'People should have confidence in their election system,' Jean-Pierre said.

Conspiracy theories about the security of election systems were pushed by Donald Trump supporters after his loss in 2020 and have continued to take hold in the midterm election.

Russia has reactivated its trolls and bots ahead of the November 8th contest. And the FBI has issued warnings about disinformation threats.