The UN chief calls the situation in Myanmar an ‘unending nightmare’ for citizens and a threat to the security of the region. 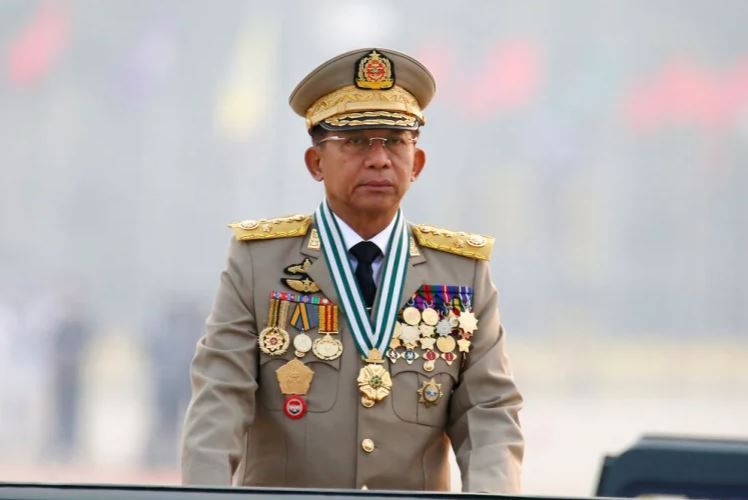 United Nations Secretary-General Antonio Guterres has urged the Myanmar military government to immediately return to democracy, saying the current situation in the country was a threat to peace in the region.
Myanmar has spiralled into bloody conflict since the military removed Aung San Suu Kyi’s civilian government in February last year, with thousands killed.
The escalating crisis dominated a summit of the Association of Southeast Asian Nations (ASEAN) regional bloc, which has led so far fruitless diplomatic efforts to end the bloodshed.
“The situation in Myanmar is an unending nightmare for the people and a threat to peace and security across the region,” Guterres told reporters on Saturday.
“I urge the authorities of Myanmar to listen to their people, release political prisoners and get the democratic transition back on track immediately. That is the only way to stability and peace.”
After meeting ASEAN leaders, Guterres said it was vital that a peace plan agreed with the military government – but so far not enforced – came into effect.
“Indiscriminate attacks on civilians are horrendous and heartbreaking,” he said.
The military has faced widespread armed opposition to its rule and has responded with brutal force.
More than 2,400 people have been killed in the past two years, according to the monitoring group the Assistance Association for Political Prisoners, while the UN children’s agency estimates that one million people have been displaced.
In a reminder of the daily horrors faced by the Myanmar people, residents and media on Friday accused the military government of burning houses and killing at least five civilians in a raid on a village in western Rakhine state.
Raising pressure
ASEAN leaders blocked Myanmar’s military ruler, Senior General Min Aung Hlaing, from attending the gathering over the spiralling violence in his country, and amid frustration that the generals in Myanmar are uninterested in implementing a peace plan.
The group agreed to a “five-point consensus” with the military government in April last year aimed at ending the chaos in Myanmar, but it has so far been ignored by the generals.
Increasingly frustrated ASEAN leaders on Friday tasked their foreign ministers with coming up with a concrete plan to implement the consensus.
They also gave their blessing to an ASEAN special envoy meeting opposition groups in Myanmar – a move that drew a furious response from the military government, which regards the dissident outfits as “terrorists”.
Western powers have heaped sanctions on the military government but violence has escalated in recent weeks, with deadly military air raids on civilian targets, including a school and a concert.
US President Joe Biden will use talks with ASEAN leaders later on Saturday to urge them to keep pushing the military government to end the violence.
Biden’s national security adviser, Jake Sullivan, said the president would “discuss how we can coordinate more closely to continue to impose costs and raise pressure on the junta”.
The military government has justified its power grab by alleging fraud in the December 2020 general elections, which Aung San Suu Kyi’s party won in a landslide.
The generals have pledged to hold elections next year, but the United States and the UN’s special rapporteur for Myanmar have said there is no chance of it being free and fair.