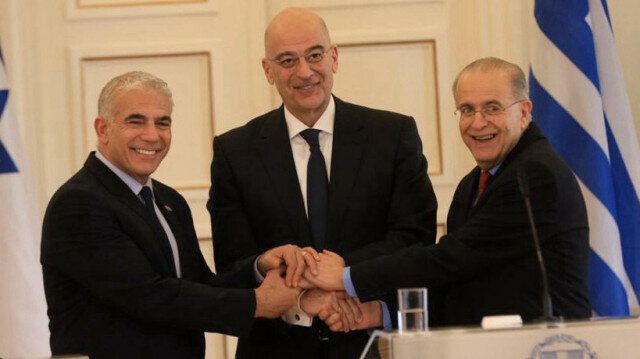 The visit by Amir Eshel, director general of the Israeli Defense Ministry, who has the authority to discuss in depth the sales of Israeli weapons to Greece, signals Tel Aviv's long-term commitment to bilateral relations with Athens, said daily Kathimerini.

About Israeli Defense Minister Benjamin Gantz's visit to Athens on Friday, the daily claimed it was meant to "clear the smoke" that emerged when he canceled a scheduled visit to Greece in October and went to Türkiye instead, where he met Turkish counterpart Hulusi Akar for talks on bilateral ties and security issues.

The report also drew attention to the ongoing rapprochement between Ankara and Tel Aviv and stressed that Benjamin Netanyahu, prime minister-elect of Israel, has already assured Turkish President Recep Tayyip Erdogan that he also wishes to continue the process.

The Israeli side, however, assured Greece that improving bilateral relations, especially in the military and defense areas, would not be affected by the normalization of relations with Ankara.

Noteworthy that the daily claimed that Israel wants to play a role in the de-escalation of tensions between Ankara and Athens.

Israel can act as a bridge in the Eastern Mediterranean to ensure peace and stability for all, Gantz said during his Athens visit this week, according to the daily.

In July, Greek news outlets reported that the country is in advanced talks with Israel to purchase Spike non-line-of-sight missiles for €370 million ($382 million).

Missiles are planned to be deployed on the ground units stationed in Greece’s northeastern Evros region bordering Türkiye and in the Aegean Islands.