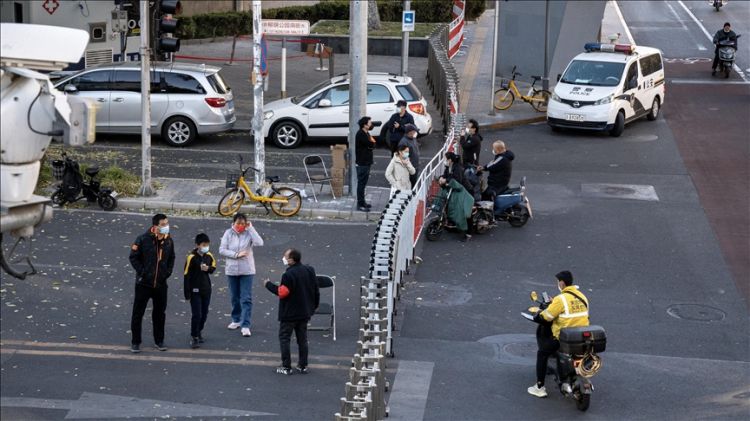 The strict and tiring restrictions imposed by China to stem the spread of COVID-19 have reportedly triggered outbursts of anger with people seen clashing with law enforcement personnel, Ednews reports citing Anadolu Agency.

Videos shared on social media showed workers at an iPhone manufacturing plant in the Chinese city of Zhengzhou, the capital of east-central China’s Henan province, demanding “rights” as they clashed with hazmat suits-donning cops and health workers.

The burst of anger into physical confrontation comes after weeks of strict COVID-19 restrictions as China has seen a steep rise in locally transmitted coronavirus cases.

It comes when Chinese health authorities have warned against “any slackening in epidemic prevention and control.”

“China faces a grave and complex COVID-19 situation with a wider spread and more transmission chains of the virus,” Mi Feng, spokesperson for the National Health Commission (NHC), said on Tuesday, stressing a “science-based and precise COVID-19 response.”

While Beijing’s “Zero-COVID” policy has restricted the spread of the deadly infection, saving people’s lives, it has also invited sharp criticism as the law enforces locked down neighborhoods, not allowing people to come out of their homes unnecessarily and requiring them to undergo several tests for their daily routine in public life.

In the latest confrontation, the protestors, who are said to be the newly-recruited employees, complained over "quarantine with no food" while their employer has also reportedly not fulfilled all promises.

The veracity of the videos could not be independently confirmed. Officials and state media have yet to comment on the latest protests against the coronavirus restrictions.

The NHC said in a statement today that the country reported 2,719 new cases of confirmed infections, including 2,641 indigenous cases on Tuesday. Most of the locally transmitted cases were reported in southeastern Guangdong province.

The country has reported 293,506 confirmed cases since the early days of the pandemic in December 2019.