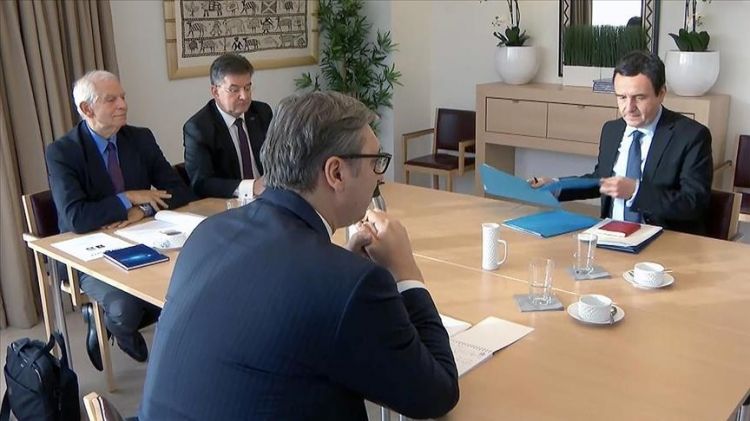 ''We have a deal! Very pleased to announce that the Chief Negotiators of Kosovo and Serbia under EU-facilitation have agreed on measures to avoid further escalation and to fully concentrate on the proposal on normalization of their relations,'' Borrell said on Twitter.

Serbia and Kosovo failed Monday to reach an agreement to resolve the license plate dispute after a series of meetings in Brussels.

According to Borrell, Serbia will stop issuing license plates bearing the initials of Kosovo cities while Kosovo will cease further actions related to the re-registration of vehicles.

''I will invite the parties in the coming days to discuss the next steps,'' he added.

Tensions between Serbia and Kosovo have risen since ethnic Serbs in Kosovo withdrew from all central and local institutions in protest over Pristina’s decision to replace old car license plates issued by Serbian authorities with those from Kosovo.

Borrell held an emergency meeting focused on dialogue between Serbia and Kosovo to discuss how to find a solution to the license plate crisis.

Kosovo declared its independence from Serbia in 2008, with most UN member states including the US, UK, France, Germany and Türkiye recognizing it as a separate autonomous country from its neighbor.

But Belgrade continues to regard it as its territory.

Prior to the latest agreement, the second phase of Kosovo's decision on the re-registration of vehicles had been expected to begin Monday, with the owners of vehicles with Serbian license plates set to be fined €150 ($154).

Pristina had earlier said that it would start issuing fines this month to Serb drivers using old pre-independence plates and would confiscate vehicles with outdated registration numbers after April 21, 2023.

The EU and NATO had urged both Serbia and Kosovo to refrain from unilateral actions and resolve outstanding issues through dialogue.

Brussels has facilitated the Serbia-Kosovo dialogue, which is designed to ease tensions and resolve bilateral issues, one of the requirements for full-fledged EU membership.