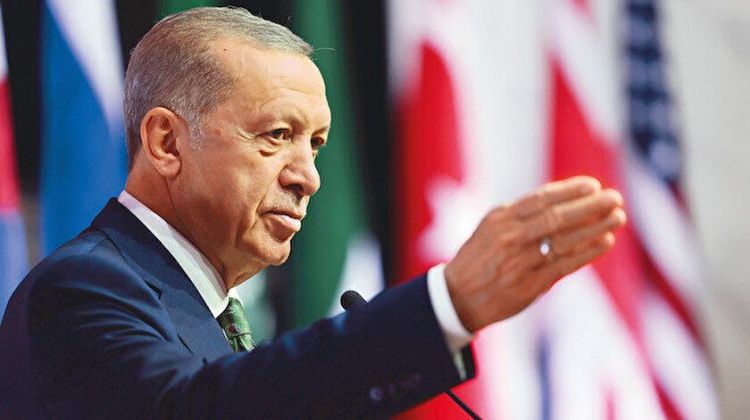 "First, this operation in northern Iraq and northern Syria is not an operation that was carried out with random thought, by saying 'who would say what?' or 'how would that happen?'

"As we have said before if someone disturbs our country and lands, we will make them pay the price. So, there are terrorist organizations in our southern border that are planning numerous attacks or that carry out such attacks and pose a threat (to Turkiye)," Erdogan told reporters on Sunday on his way back to Ankara from Qatar.

Erdogan's remarks came after Turkiye launched early Sunday the Operation Claw-Sword, a cross-border aerial campaign against the terror group YPG/PKK that has illegal hideouts across the Iraqi and Syrian borders, where they plan attacks on Turkish soil.

"This is not limited to just an air operation," Erdogan stressed, adding that the relevant units will do their consultations and take steps accordingly.

The Turkish National Defense Ministry said the operation was carried out in line with the right to self-defense under Article 51 of the UN Charter. Erdogan added that nearly 70 jets, including armed drones, took part in the operation and added that a total of 89 terror targets, including shelters, bunkers, caves, tunnels, and ammunition depots were destroyed.

Asked if Turkiye talked about this operation with Russia and the USA, Erdogan said.

"We have not had any conversations with (US President Joe) Biden or (Russian President Vladimir) Putin regarding this operation. However, both Biden and Putin already know that we can do such things in this region at any time."

"They had the responsibility to clear the terrorists from the area. Unfortunately, even though we reminded them many times, over and over, they did not take heed of our calls.

Turkiye is with the USA in NATO, Erdogan said, noting, however, that Washington has unfortunately sent thousands of equipment, ammunition, and weapons to the zone of terror in Syria.

During his talks with Biden in Indonesia, Erdogan said: "I told him that 'we are together with you in NATO, we are two important allies. Since such a threat came to us from the south, you are putting us in trouble by giving support to the terrorist organizations there. Of course, we cannot live with these problems. When necessary, we will have to give the necessary answer to them.' Of course, they can't say anything. We have done what is necessary at this point, we are doing it, and we will continue to do so."

In its more than 35-year-long terror campaign against Turkiye, the PKK – listed as a terrorist organization by Turkiye, the USA, and the EU – has been responsible for the deaths of over 40,000 people, including women, children, and infants. The YPG is the terror group's Syrian offshoot.

Erdogan briefly met with Egyptian President Abdel Fattah al-Sisi on the sidelines of the FIFA World Cup in Qatar which attracted great attention since the relations have been tense since 2013.

"We said that a process can begin. A step has been taken here to start such a process and we had the talks. It is my hope that we want to move the process that started with our ministers to a good point later, hopefully to the high-level meetings," Erdogan said.

The unity of the Turkish nation and the Egyptian people in the past is very important to Turkiye, Erdogan said, adding: "Why not again, why not start again? We gave a signal."

He added Turkiye expects Egypt to establish peace together against those who take a stand against them in the Mediterranean.

Diplomatic relations between Turkiye and Egypt are maintained at the level of charges d’affaires on both sides since Egypt's 2013 military coup which overthrew the late President Mohammed Morsi.

"We even made such a plan that we buy the wheat if necessary, turn it into flour in Turkiye, and then send it to underdeveloped countries," he added.

Last week, a landmark grain deal, signed in Istanbul in July by Turkiye, the UN, Russia, and Ukraine, was extended for another 120 days allowing Ukraine to export its agricultural products from Black Sea ports.