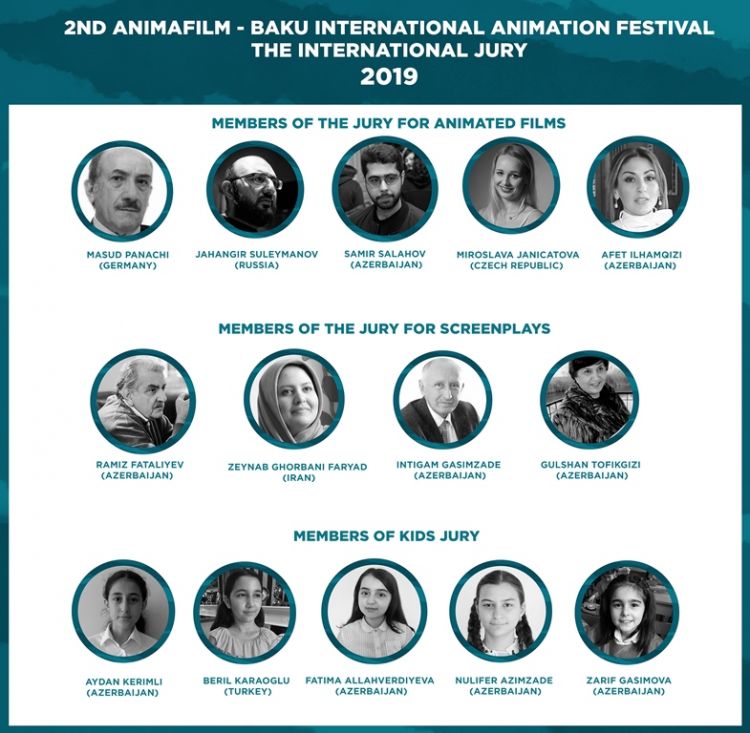 Second ANIMAFILM Festival Announces International Jury Members
The Organizing Committee of the 2nd ANIMAFILM Baku International Animation Festival has announced the members of its jury, composed of professionals from Germany, Azerbaijan, Russia, Iran, and the Czech Republic.
Two international juries and one national childrens’ jury will evaluate animated films and screenplays of the competition program of the festival, which aims to support talent and further the development of animation.
In addition, every audience member in the festival will be able to make his or her own contribution to the evaluation of animated films by voting on them. At the end of the voting, an Audience Favor Award will be presented.
The international jury will be led by Masud Panachi, well-known director and animator of Azerbaijan.
The ANIMAFILM Organizing Committee also plans to award a Golden Boat trophy at the festival to someone who has made great contributions to the development of animation in Azerbaijan.
The members of the jury will also actively participate in the festival’s noncompetitive and professional programs.
The ANIMAFILM Organizing Committee is pleased to present the members of all three juries:
1) Members of the Jury for Animated Films
- Masud Panachi (Germany) - director, animator, animation artist, and screenwriter.
- Jahangir Suleymanov (Russian Federation) - director, animator, animation artist.
- Samir Salahov (Azerbaijan) - artist who has been active in fields such as animation, painting, digital art and street art.
- Miroslava Janicatova (Czech Republic) - animation and film scolar.
- Afet Ilhamqizi (Azerbaijan) - script writer, director and host of the TV series Palitra ART on  Azerbaijan State Television (AzTV).
2) Members of the Jury for Screenplays
- Ramiz Fataliyev (Azerbaijan) - Azerbaijani and Russian screenwriter, People’s Artist of Azerbaijan, Honored Art Worker, and laureate of the Republic State Award.
- Zeynab Qurbani Faryad (Iran) - photographer, screenwriter, animation director, and illustrator.
- Intiqam Qasimzada (Azerbaijan) - literary critic, translator, member of Azerbaijan Writers’ Union since 1985, and an Honored Art Worker.
- Gulshan Tofikqizi (Azerbaijan) - editorial writer and screenwriter, a member of Azerbaijan Writers’ Union and Azerbaijan Cinematographers’ Union.
3) Members of Kids Jury
- Aydan Kerimli (Azerbaijan) - pupil of Integration Training Boarding School No.11 in Bilgeh settlement. She is a pupil of the GURAMA childrens’ animation studio.
- Beril Karaoglu (Turkey) - lives in Istanbul. She is in fourth grade and is 10 years old.
- Fatima Allahverdiyeva (Azerbaijan) - lives in Baku. She is a 7th-grade pupil at School no. 257. She is 12 years old. She intends to major in animation in the future.
- Nilufar Azimzada (Azerbaijan) - Nilufar currently lives in the Masazir settlement of Baku. She is 14 years old.
- Zarif Qasimova (Azerbaijan) - She currently lives in Sumgayit. She is a 2nd-grade pupil at the Gymnasium for Fine Arts affiliated to Azerbaijan National Conservatory.
www.animafilm.az/en