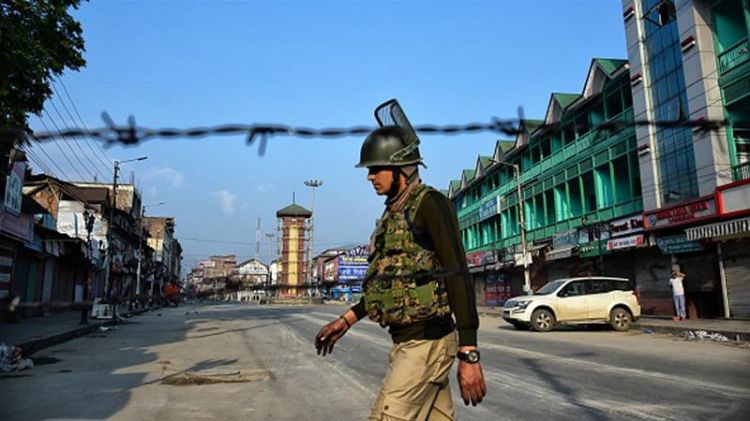 United Nations - Envoys from nuclear-armed neighbours India and Pakistan have traded barbs outside the United Nations Security Council chamber, after members met behind closed doors for rare talks on the disputed region of Kashmir.
The meeting on Friday came as Indian-administered Kashmir remained under a military lockdown for a 12th straight day following the highly controversial decision by the Hindu nationalist government in New Delhi to revoke the special status accorded to the Muslim-majority state in India's constitution.
Council members met for 90 minutes amid heightened tensions in the contested Himalayan region, which has long been a flashpoint between India and Pakistan - the two countries, which both claim Kashmir in full but rule it in part, have fought two of their three wars over the disputed territory. India is also fighting a three-decade rebellion in Jammu and Kashmir that has claimed tens of thousands of lives.
Pakistan requested the Security Council meeting in a letter on August 13 and it was subsequently called for by permanent member China.
The 15-nation body heard briefings from Oscar Fernandez-Taranco, the UN's assistant secretary-general for peacebuilding support, and Carlos Humberto Loitey, the UN military adviser for peacekeeping operations.
Following the session, Maleeha Lodhi, Pakistan's ambassador to the UN, said the council's first meeting on Kashmir in more than 50 years was only a "first step" that Islamabad would take in support of the people of Kashmir.
"This meeting nullifies India's claim that Jammu and Kashmir is an internal matter for India. Today, the whole world is discussing the occupied state and the situation there," she told reporters.
"The people of Jammu and Kashmir may be locked up, their voices may not be heard in their own homes and their own land, but their voices were heard today at the United Nations and their voices will always be heard because Pakistan will always stand by them."
Minutes later, Syed Akbaruddin, India's UN ambassador, told journalists that Kashmir was an "internal matter" for India and that it was "gradually removing all restrictions" that were recently placed on the region as it "moves towards normalcy".
"Of particular concern is that one state is using terminology of jihad against and promoting violence in India, including by the leaders," Akbaruddin said, without identifying the country by name.
"We are saddened that terrorism is being fuelled, language and incendiary talk of jihad is being mentioned by people who should know better."
Indian-administered Kashmir remains under lockdown (2:08)
SC 'seriously concerned'
For his part, Zhang Jun, China's UN ambassador, told reporters that council members had been "seriously concerned" by the Kashmir crisis and that neither India nor Pakistan should provoke a situation that was "already very tense and very dangerous".
Those countries should "discard the zero-sum game mentality" to the region, he added.
Dmitry Polyanskiy, Russia's envoy to the UN, said Moscow was concerned by the crisis but added that it was a "bilateral issue" best tackled directly between New Delhi and Islamabad.
Dynamics in the council chamber were understood to be guided by long-standing relationships. The United States is a traditional backer of India and China of Pakistan, while many council members have close relations with both countries.
Kumi Naidoo, secretary-general of the human rights group Amnesty International, said in a statement that Security Council members needed to safeguard the human rights of the people of Kashmir.
"The actions of the Indian government have thrown ordinary people's lives into turmoil, subjecting them to unnecessary pain and distress on top of the years of human rights violations they have already endured," Naidoo said on Friday.
"The people of Jammu and Kashmir should not be treated as pawns in a political crisis, and the international community must come together to call for their human rights to be respected."
Imran Khan on Kashmir: Modi's ideology compared to Nazis (3:15)
Tensions remain high in Kashmir
As the council met, tensions remained high in the disputed Kashmir region.
Earlier on Friday, Pakistan's army reported more exchanges of fire across the heavily militarised Line of Control dividing Pakistan- and Indian-administered Kashmir. It said one Pakistani soldier was killed, bringing the death toll to six in under than 24 hours.
UN Secretary-General Antonio Guterres has urged Pakistan and India to refrain from any steps that could destabilise Indian-administered Kashmir, while also expressing worrying by the reports of restrictions there.
On August 5, India's Hindu nationalist government revoked Article 370 of the Constitution and ended the decades-old autonomy Jammu and Kashmir enjoyed, including powers to pass laws on all matters except defence, communications and foreign affairs.
Before the move, New Delhi sent thousands of extra troops to the disputed region, imposed a curfew, banned public assembly, shut down phone lines and internet and arrested political leaders.
AlJAZEERA