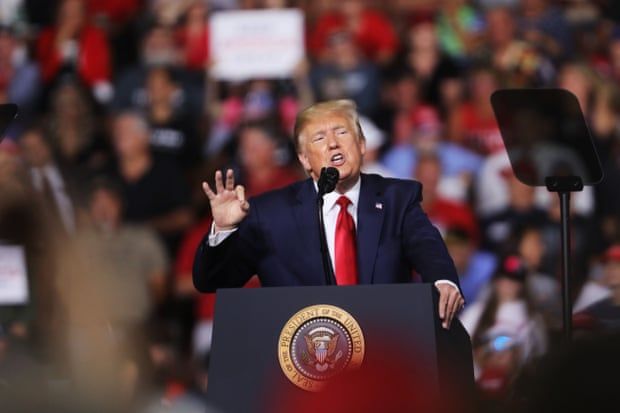 Donald Trump has made the US economy a centerpiece of his re-election campaign, relishing reports of steady job growth and low rates of unemployment.
But now, concerns of an economic downturn, buoyed by the president’s escalating trade wars, have threatened to undermine the core of his case for a second term in the White House.
Trump’s handling of the economy has earned him flashes of positive marks in an otherwise polarizing tenure in office. But since the stock markets plunged nearly 3% on Wednesday – the sharpest declines on Wall Street this year – the president has been beset by anxiety over the possible impact of an American recession on his watch.
“The economy is absolutely critical to his re-election,” said Michael Steel, a former aide to the retired House speaker John Boehner. “The handling of the economy is, generally speaking, the only issue that he is viewed positively on in polling.
“There’s no way to make a case for the success of the administration that does not rely heavily on a strong economy.”
Since taking office, Trump has routinely touted the expansion of the US economy that began under Barack Obama and has largely continued under his administration. He has championed an economic boom in hundreds of tweets.
“An economic miracle is taking place in the United States,” Trump declared in his State of the Union address this year.
All the while, the president has ignored warnings from economists about the prospects of a global trade war and sought to weaponize tariffs with China and even traditional US allies such as Canada and the European Union.
Despite Trump’s claims to the contrary, those trade practices have injected uncertainty into the markets. The brunt of the impact of the president’s tariffs have meanwhile been borne by the US agricultural industry and American consumers.
If the economy does sour and the trade war continues, Republican strategists said, Trump’s path to victory over the next 14 months might soon be riddled with challenges.
“A lot of voters are willing to look past the tweets and the chaos, because the economy has been so strong,” said Alex Conant, a Republican operative who served as a top aide to Marco Rubio’s 2016 presidential campaign. “But if the economy is weak then they’ll be less forgiving for the aspects of his presidency that they don’t like.”
Polling from earlier this year found that 56% of Americans approved of Trump’s handling of the economy. White House advisers clung to the new high as a counterpoint to Trump’s broader approval ratings, which on average rank among the lowest of any US president in modern history.
“People will vote for somebody they don’t like if they think it’s good for them,” the White House chief of staff, Mick Mulvaney, said this year, characterizing Trump’s message going into 2020.
“You hate to sound like a cliché, but are you better off than you were four years ago? It’s pretty simple, right? It’s the economy, stupid. I think that’s easy,” he added.
Historically, most US presidential elections have centered on the economy, with voters consistently ranking issues such as jobs as a top priority.
Democrats, who have already framed the 2020 race as a referendum on Trump, have insisted the economic expansion during his presidency has disproportionately benefitted the wealthiest Americans.
Campaigning in New Hampshire on Thursday, Trump maintained he had ushered in unprecedented economic progress.
“You have no choice but to vote for me, because your 401(k), everything, is going to be down the tubes,” Trump said at a rally in Manchester.
“Whether you love me or hate me, you’ve got to vote for me.”
Beneath the optimistic veneer, there have nonetheless been signs that the president is worried about a looming economic slowdown. This week, Trump announced he was delaying the implementation of tariffs on a wide range of Chinese imports, citing the potential consequences on US shoppers during the holiday season.
The move came as the Wall Street Journal’s conservative editorial board published yet another op-ed criticizing the Trump administration’s trade policies.
“We’ve been warning for two years that trade wars have economic consequences, but the wizards of protectionism told Mr Trump not to worry. The economy was fine and the trade worrywarts were wrong,” the editorial stated.
The drop in the markets, they noted, were “an omen of the future, not destiny”.
“The key to avoiding the worst is to restore a sense of policy calm and confidence. Stop the trade threats by tweet. Call a tariff truce with China, Europe and the rest of the world while negotiations resume,” they added.
“Someone should tell Mr Trump that incumbent presidents who preside over recessions within two years of an election rarely get a second term.”