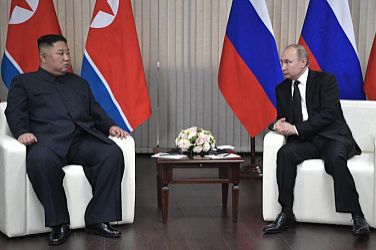 North Korean and Russian representatives signed a new protocol on cross-border rail, road, and sea transport during meetings in Pyongyang this week, Eurasia Diary reports citing Tass.
It added that the protocol “sets out the main activities” in those areas of transport, while additional reporting from Russia’s state news agency said the two discussed starting container shipments from South Korea to Russia through North Korean territory.
Traveling to Pyongyang was Russia’s Deputy Minister of Transport Vladimir Tokarev, to attend the “9th meeting of the Subcommittee on transport” under the Intergovernmental Committee (IGC) for Cooperation in Trade, Economics, Science and Technology held on November 12-13.
The protocol was signed between Tokarev and DPRK Ministry of Railways deputy minister Ham Pyong Guk.
According to the embassy, meetings in Pyongyang this week were also attended by representatives of the Ministry for the Development of the Russian Far East, as well as from various Russian companies.
These include the state-owned Russian Railways and the Vladivostok-based companies Primorsky Gas and ATP Primorye.
ATP Primorye operates bus and train routes in the region and over the border into China, and may be seeking rights over similar routes into the DPRK.
Also present was CEO Ivan Tonkikh of RasonConTrans, a joint venture with the DPRK which operates a rail line from the Russian Far East to North Korea’s Rason Economic and Trade Zone — exempted from sanctions to transship strictly Russian-origin coal through the Rason port.
According to an interview between the TASS News Agency correspondent in Pyongyang and deputy minister Tokarev, the two sides in meetings this week also discussed beginning to test the shipment of containers from South Korea to Russia through North Korean territory.
Tokarev told TASS that South Korean counterparts in past meetings have already indicated they “are ready to support us in lifting restrictions” on the shipments but that a starting date had yet to be decided.
The report did not say whether the restrictions to which he referred were current UN sanctions preventing the shipments or rather South Korean unilateral measures.
Report said that at the talks in Pyongyang this week, “an agreement was reached to organize a trilateral meeting with representatives of North Korea, South Korea, and Russia to further study this issue.”
The deputy transport minister pointed to the groundbreaking ceremony for the renewed inter-Korean rail project held on the North Korean side of the border on December 25 last year, which he attended, as the start of larger projects to connect the South to Russia.
“This year we want to move forward,” he said. “We want to start shipping containers, now the first stage — a test — and then on an ongoing basis.”
But inter-Korean relations have deteriorated significantly since that optimistic ceremony last December, and the U.S. has yet to signal support for lifting sanctions at the UN to allow such shipments to take place.