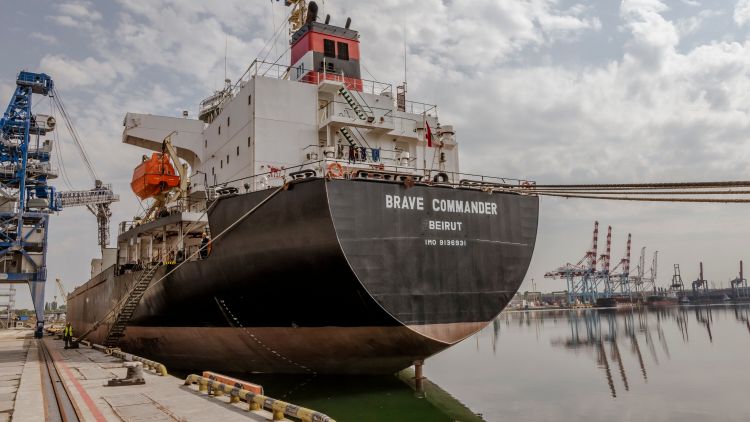 The first ship carrying grain from Ukraine to the Horn of Africa has departed, the World Food Program said Tuesday.
Maritime grain exports from Ukraine resumed last month following a deal brokered by the United Nations and Turkey that ended a monthslong Russian blockade. The U.N.-chartered bulk carrier, the Brave Commander, is the first ship transporting grain directly to African countries that have endured food shortages since Russia’s invasion of Ukraine halted food exports by sea six months ago.
The Brave Commander is loaded with 23,000 metric tons of grain to be distributed primarily in Ethiopia, where a four-year drought has left millions facing severe hunger. The ship left the Pivdennyi port in southern Ukraine at 5 a.m. local time, a W.F.P. spokesman said.
“It will take more than grain ships out of Ukraine to stop world hunger, but with Ukrainian grain back on global markets we have a chance to stop this global food crisis from spiraling even further,” David Beasley, the W.F.P.’s executive director, said in a statement.
Before the war, Ukraine supplied about 45 million metric tons of grain a year to the world market, according to the U.N. Roughly 20 million tons of grain have been stuck in Ukrainian silos since the beginning of the war.
On Thursday, António Guterres, the secretary general of the United Nations, plans to travel to Ukraine to review the working of the Black Sea grain initiative, the U.N. announced.
Mr. Guterres will meet Mr. Zelensky and President Recep Tayyip Erdogan of Turkey in Lviv, and will meet individually with Mr. Zelensky. On Friday, Mr. Guterres will travel to the Black Sea port of Odesa to see the movement of grain.
Stéphane Dujarric, the secretary general’s spokesman, said the trip allows Mr. Guterres to see firsthand the initiative that he first presented to Moscow and Kyiv in April that “is so critically important to hundreds of millions of people.”
On Saturday, Mr. Guterres plans to be in Istanbul to visit the joint coordination center set up to facilitate and supervise the movement of ships from Ukraine carrying grains, the U.N. said.