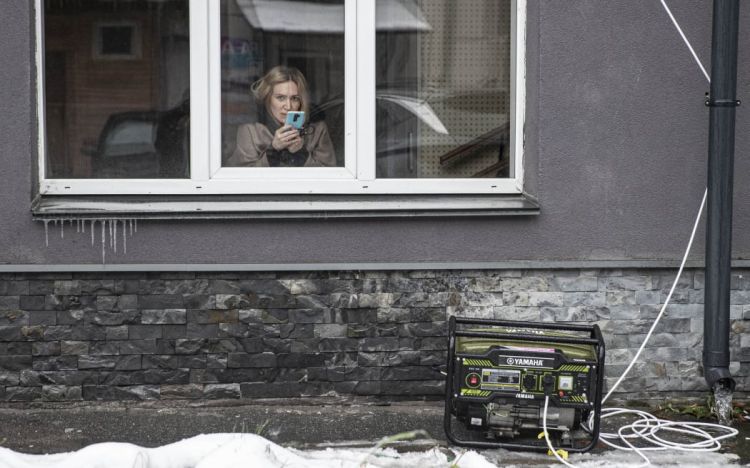 Heavy snowfall was expected in Kyiv starting on Sunday, with temperatures dropping below freezing day and night, while millions of people who still live in and around the Ukrainian capital remain with little electricity and heat.
Grid operator Ukrenergo said on Saturday that electricity producers were able to cover only three-quarters of consumption needs, necessitating restrictions and blackouts across the country.
President Volodymyr Zelensky said that there were restrictions on the use of electricity in 14 out of Ukraine's 27 regions and in Kyiv, for "more than 100,000" customers in each of the regions.
"If consumption increases in the evening, the number of outages may increase," Zelensky said in his nightly video address.
"This once again shows how important it is now to save power and consume it rationally."
Sergey Kovalenko, chief operating officer of YASNO, which provides energy to Kyiv, said the situation in the city has improved but still remained "quite difficult."
He indicated that residents should have at least four hours of power per day.
"If you haven't had at least four hours of electricity in the past day, write to DTEK Kyiv Electric Networks, colleagues will help you figure out what the problem is," Kovalenko wrote on his Facebook page.
YASNO was the retail branch of DTEK, Ukraine's largest private energy provider.
Russia's latest bombardment on Wednesday inflicted the worst damage so far in the conflict, leaving millions of people in Ukraine with no light, water or heat.
Russia said it does not target the civilian population, while the Kremlin said that Moscow's strikes on energy infrastructure were a consequence of Kyiv being unwilling to negotiate.
In a rare public spat involving Ukrainian leaders, Zelensky on Friday criticised the mayor of Kyiv for doing what he said was a poor job setting up emergency shelters to help those without power and heat after Russian attacks.
Ukrenergo said that blackouts will continue and urged limited use of power.
"We would like to remind you that now every Ukrainian whose home has had electricity restored can help restore it to others faster, simply by consuming electricity sparingly," it said in a statement on the Telegram messaging app.
Snow was expected to continue in Kyiv, a city that had 2.8 million residents before the war, until midweek while temperatures were forecast to stay below freezing.