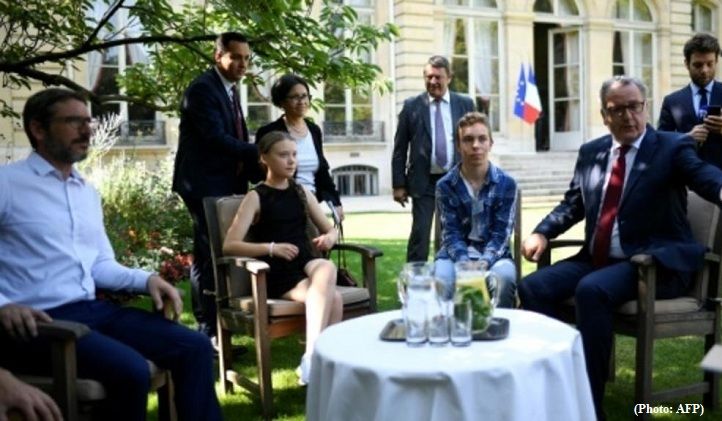 Swedish teenage climate activist Greta Thunberg hit back at critics as she visited the French parliament on Tuesday following outraged comments from some right-wing MPs who have slammed her presence, AFP reports.

Thunberg, 16, whose school strikes protesting government inaction over climate change helped sparked a worldwide movement, is to speak to MPs at the National Assembly and then attend debates in the main chamber as a guest of honour.

The activist, who was invited by 162 MPs from a cross-party group concerned about climate change called "Let's Accelerate", was welcomed by speaker Richard Ferrand at his residence before heading to parliament.

But many conservative figures on the French right have criticised the invitation, dismissing her as a "prophetess in shorts" and the "Justin Bieber of ecology".

Republicans MP Guillaume Larrive called on MPs to boycott her appearance, saying that to fight climate change "what we need is scientific progress and political courage, not apocalyptic gurus".

Julien Aubert, like Larrive a Republicans MP contending for leadership of the right-wing party, snapped: "Don't count on me to applaud a prophetess in shorts, a Nobel Prize for Fear."

Jordan Bardella, an MEP who is one of the rising stars of the far-right National Rally (RN), told France 2 television that "this dictatorship of perpetual emotion -- all the more when it relies on children -- is a new form of totalitarianism".

Bardella, 23, lashed out at "using children to show a fatalism to try and explain to all young people that the world is finished, that everything is going to catch fire and that nothing is possible."