daily news
Umud Mirzayev - "There is a need to carry on works on mine problem"
Dutch police arrest couple on plane for Spain as they flee COVID-19 quarantine hotel
Azerbaijan can help Iran in energy sector– Iranian experts on Ashgabat Summit
Russia to be main focus of NATO foreign ministers meeting
Azerbaijani President said Sochi meeting was very important
Change in US behavior, a must for success of Vienna talks - Russian expert
Russia begins serial production of Tsirkon hypersonic missiles for Navy
Turkmenistan to start gas supply to Azerbaijan over SWAP by the endyear

Statement on the results of trilateral meeting among Russian, Azerbaijani and Armenian leaders - Full text
Read: 360

Mechanisms for delimitation and demarcation of Azerbaijani-Armenian borders to be created before the end of year
Read: 267

Peace and stability critical for the region - Turkish defense minister 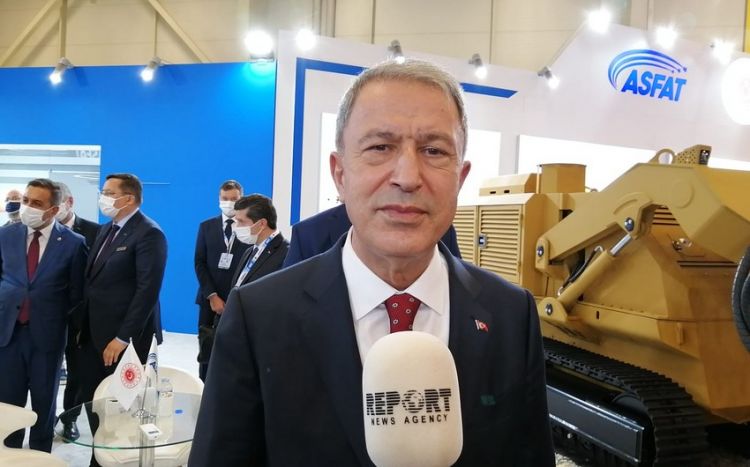 "The military exercises we are holding with Azerbaijan in Georgia, an important country of the critical region, like the Caucasus, will be useful for our defense forces," the local bureau of Report says, citing Turkish National Defense Minister Hulusi Akar, Report informs.

He called the meeting of the defense ministers of the three countries a good opportunity to discuss current relations and assess future prospects.

The minister also added that the meeting touched upon the work to be done to maintain peace and stability in the region.

“This geography is very important in many respects, as well as in terms of oil and gas pipelines. That is why it is of great importance not only for us but also for the whole region to have peace and stability in this region.”