Russia warns Britain is ‘too deep’ into Ukraine conflict - ednews.net

Azerbaijan's mine problem through the eyes foreign bloggers - VIDEO
Read: 169

Russia warns Britain is ‘too deep’ into Ukraine conflict 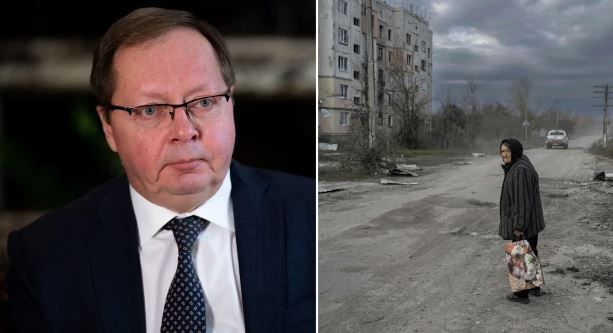 Britain it has been drawn ‘too deep’ into the war in Ukraine, the Kremlin has said.
Russian officials claim the situation is becoming ‘more and more dangerous’.
Andrey Kelin, the country’s ambassador to the UK, fumed that British ‘specialists’ had been involved in a drone attack on Russia’s Black Sea fleet at the weekend.
The incident had left three warships damaged.
In an interview with Sky News, Mr Kelin has claimed the Kremlin would publish its ‘proof’ of British involvement in the drone attack ‘pretty soon’.
He said: ‘We perfectly know about participation of British specialists in training, preparation and execution of plans against the Russian infrastructure and the Russian fleet in the Black Sea. We know that it has been done.
‘It is dangerous. It can bring us to the line of I would say no return – return is always possible – but we should avoid escalation.
‘This is a warning actually that Britain is too deep in this conflict. It means that the situation is becoming more and more dangerous.’
The Kremlin’s latest claims have been dismissed by the UK Government who have suggested they are thinly veiled attempts to ‘distract attention’ away from the failings of the war.
A spokesperson said: ‘We do not plan to give a running commentary on these allegations; it is no secret that the United Kingdom has taken a public lead in our support to Ukraine – this has been enduring since Russia’s illegal annexation of Crimea in 2014.’
Earlier western officials said President Vladimir Putin was likely to come under increasing pressure from nationalist hardliners as he prepares to withdraw Russian forces from the key Ukrainian city of Kherson.
One resident, Anastasya, evacuated her son at the outbreak of war.
She decided to stay in Kherson, telling the Guardian today: ‘The city feels somewhat abandoned.
‘Everyone who sympathised with Russia has fled, and the rest are stocking up on food.’
Officials said planning to pull forces out of the city on the Dnipro River appeared to be well advanced with a large proportion of the civilian population having already been moved out.
But while officials expect it to be presented by the Kremlin as a humanitarian evacuation rather than a military retreat, they believe it will not prevent further criticism of the conduct of the war.
The assessment comes as one former Putin ally – the head of the notorious Wagner mercenary group, Yevgeny Prigozhin – stepped up his criticism of the Russian leader.
In a statement earlier this week he pointedly praised Ukrainian President Volodymyr Zelensky – who is routinely denounced by Moscow as a neo-Nazi drug addict – as a ‘strong and confident leader’.
Officials say that Russia is also running ‘critically short’ of munitions – including artillery shells with additional supplies even being sought from North Korea.