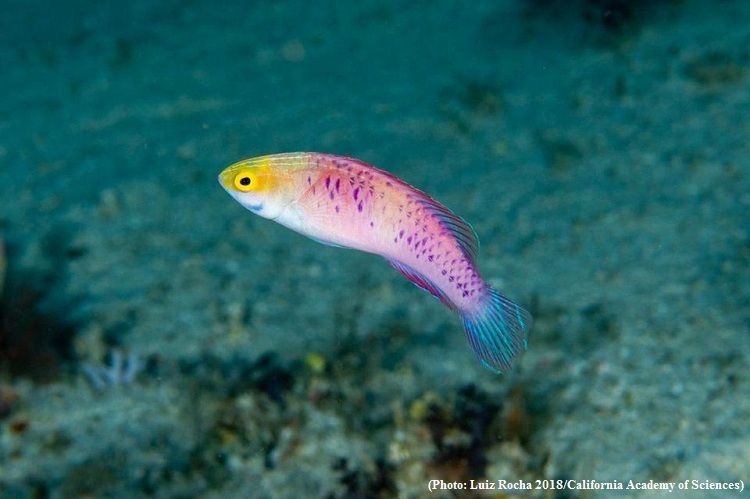 A new species of fish is named after the fictional African kingdom of Wakanda and its closely guarded resource, a metal called vibranium. Discovered in dimly-lit coral reefs about 260 feet below the surface of the Indian Ocean, just east of Zanzibar, the species is a type of fairy wrasse (small, colorful reef-dwelling fish which are also popular in aquariums), Forbes reports.

Its vibrant purple scales and their chain-mail pattern reminded discoverers of King T'Challa's Black Panther suit and other fabrics seen in Wakanda in the recent Marvel movies, so they dubbed it the vibranium wrasse. Officially, its new name is Cirrhilabrus wakanda, in honor of the secluded habitat that has kept the fish hidden from scientists until now.

"When we thought about the secretive and isolated nature of these unexplored African reefs, we knew we had to name this new species after Wakanda," said University of Sydney ichthyologist Yi-Kai Tea in a statement to the press. Like Wakanda, the dimly lit mesophotic reefs where the vibranium wrasse lives are hidden and hard to reach. 200 to 500 feet below the surface of the Indian Ocean, they're near the limit of the depths human divers can reach. Divers can spend just a few minutes exploring the reef before they have to begin the long, slow, careful process of returning to the surface.

But like Wakanda, the ocean's deep, twilight reefs' best chance of survival is in revealing themselves to the world. As the world's changing climate warms and acidifies the oceans, coral reefs face dangerous times. Knowing what's there may help scientists and policymakers better protect it.