Iran urgently deployed dozens of missile systems on the coast of Strait of Hormuz
Read: 1181 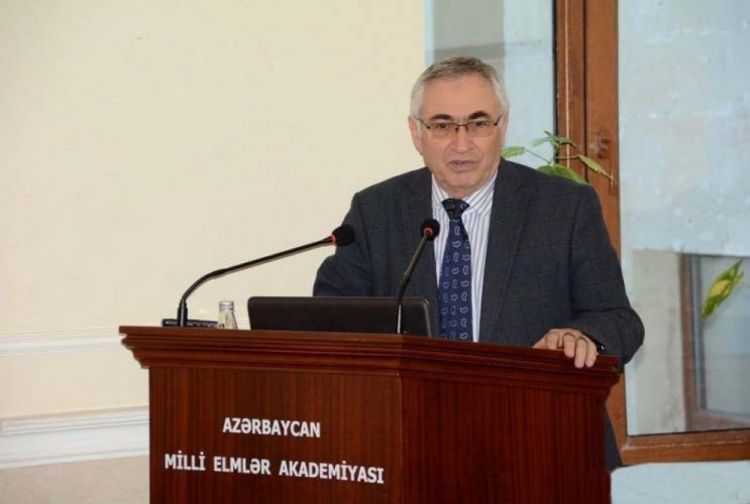 In recent years, Azerbaijani academician, Prof. Hatam Guliyev with our other scientists in the field of geology and geophysicshas proposed a new scientific approach entitled "Disturbances of the surface and changes in the Earth's shape"; that allowed introducing new models into science, giving impetus for further development and reaching high scientific peaks. One of these achievements is the recent publication in a large volume of the scientific manuscript entitled “Once Again on Preliminary Reference Earth Model (PREM)” of Prof. Hatam Guliyev in collaboration with corresponding member of Azerbaijan National Academy of Sciences (ANAS) Rashid Javanshir in the authoritative journal "Earth and Space Science"; of the American Geophysical Union (AGU).

In connection with this success, AZERTAC took an interview from the doctor of physical and mathematical sciences, Prof., current member of ANAS, head of the department of Tectonophysics and Geomechanics of the Institute of Geology and Geophysics of ANAS, Honored Scientist Hatam Kuliyev.

- Recently your new scientific achievements have drown attention of the public. Congratulations! Tell us about the results of your research, please.

- Thank you very much. First of all, I would like to tell about the scale of the achieved result. In my opinion, this result is the achievement of the entire Earth science, the whole world. Of course it is a great and unique event in the history of our country. This result leads reconsider many of the fundamental problems of geology, geophysics, and Earth sciences. I would like to note that one of the reviewers made the following remark during the reviewing process of the manuscript in the editorial board of the journal: Do you want to revise all geophysics? We replied that we don't have such a desire, we want to clarify the situation arisen around the solid core of the Earth as a result of our research. But you have to rewrite all geophysics again. They noted our good sense of humor.

But time passed, humor was left behind, reality impresses imagination. It turned out that the wrong data set was proposed as data on the physicomechanical and elastic properties of the Earth's reference model. The scale of these results is such that scientists all over the world of this field will have to correct the situation and create the right reference model in the next centuries.

-Are you pleased with the results?

-Certainly. I would like to share my joy with friends, compatriots, and mainly with the head of our state, highly respected president Ilham Aliyev. We have seen how happy the president, the first lady of the country and their children are in various international sports competitions, contests and festivals. Therefore, I would like to make them glad with the triumph of the mind and science, and I would like to express my gratitude them for their titanic efforts and achievements in the development of our country. The achieved result is eternal, it is impossible for anyone to claim co-authorship. It was achieved by Azerbaijani scientists and will always refer to these results as the grandiose prospects of scientific researches are opened up in various fields of Earth sciences here. These studies will lead to fundamental changes in our worldview on the evolution of the Earth and similar planets.

- How did it happen that you showed interest in these problems and directed your scientific activity precisely in this direction?

- At the end of 2017, the head of the innovation department of our institute, Doctor of Sciences Vagif Ibrahimov brought me an article of Russian scientists published in the journal “Geology and Geophysics” of the Siberian Branch of the Russian Academy of Sciences dedicated to the theoretical model of the Earth. At first glance, I expressed a negative opinion. There was a figure on the structure of the Earth and some data on the thermobaric conditions in its centre on the first page of the manuscript. I was surprised as a specialist in mechanics. Is it possible that a solid medium can form and exist under such high thermobaric conditions? A few days later I carefully looked through the manuscript and really I had an interest in the theoretical model. My subsequent studies showed that serious simplifications and misconceptions were made while creating theoretical models of the Earth including the reference model, and it is necessary to analyze the results from the standpoint of the mechanics of a deformable solid body. As a result of such studies, we created a method of nonlinear geomechanical analysis of the entire complex of initial data of theoretical models of the Earth. We tried to answer the question: is there a solid core in the center of the Earth? Unfortunately, the results showed that such a core cannot exist. Our further researches led us to establish the inconsistency of preliminary reference Earth model from the standpoint of geomechanics. We published these results in various journals. There was a great discussion. Because, the hypothesis of the existence of the solid core of the earth, which was put forward by the West European scientist Lennon, was still considered the most outstanding achievement of world geophysics of the 20th century. Everyone was interested in one basic question: is there a solid core of the Earth, or not? I organized a mini symposium on the topic “Multidisciplinary problems of geomechanics” where detailed discussions of our results took place in 2017 within the 19th International Congress in the capital of South Korea in Seoul. Everyone was surprised.

We continued our researches on this problem. First of all, we noticed that a large number of experiments conducted using the experimental achievements of physicists in developed countries (USA, Japan, Russia, France, South Korea, etc.) show that the crystals of some iron alloys are formed in a huge liquid ocean of the outer core of the Earth under certain conditions. Hereby it is tried to justify the possibility of the formation of the inner core in the form of a solid medium. The geometric dimensions of the test samples are calculated in nano-millimeters, and the results are fixed within the smallest time, in millionth and billionth of a second in these experiments. Complex questions arise: can such crystals turn into a solid medium of large size in subsequent evolution? These questions are still open and should be answered.

- What were the opinions of colleagues of your Institute?

- I constantly informed the director of the institute, academician A. Ak. Alizade about these results. We discussed the situation. He was always interested and expressed his support. Academician Ibrahim Guliyev also expressed his support in the seminar discussions. The considered problems are essentially related to the mechanics of a deformable solid body and to the theory of propagation of elastic waves in deformable media. I am a mechanic on specialty and have been studying applied and fundamental problems in geology, geophysics, and oil and gas about fifty years. We have been cooperating with Prof. Rashid Javanshir in this field for a long time, and we have good experience in joint scientific activity. As a result of this collaboration, we have created the theoretical basis of nonclassically linearized tectonophysics. We have obtained a number of new scientific results, which are published in various authoritative international journals. We have determined that deformation processes play a significant and fundamental role in the evolution of the Earth’s internal structures. We have found out a number of their mechanisms. These deformation processes control the formation and development of folding and geological faults. We have shown that new structures are formed inside the Earth as a result of destruction through delamination. For example, lateral faults along with vertical geological faults form on spherical concentric planes in the bowels of the Earth. All this structure and deformation processes make it possible to realize tectonic and dynamic processes.

- Are these studies multidisciplinary and will be useful for innovative studies?

- Yes they are. The integrated application of the latest achievements in mechanics, physics, mathematics and information technology has made it possible to study the problem of Earth sciences in a new way. These studies are commercial in nature. We have created a nonclassically linearized base model of processing and interpretation of complex of well, geophysical, seismic exploration and seismological data based on these results. In parallel, we developed a set of computer programs GEOPRESS to implement these theoretical developments. The created theoretical algorithms and the possibility of calculation using our software package are already being used in the search and exploration of hydrocarbon potentials in the deeper horizons of the

South Caspian. They will provide an improvement and clarification of hydrocarbon reserves.

-Do you think these results will be useful for your innovative research?

- Yes, for sure. There is a great necessity of such researches. There is a good chance to turn Azerbaijan into an international center in the field of “nonlinear geomechanics".

- What new results are expected?

- The problem here does not end with the determination of error paths and the creation of a new version of reference Earth model. So far, experts have not assessed the extent of what happened. Noise rise further. The fact is that the reference model is the foundation of all created and continuing to create more complex theoretical models. On the other hand, similar conclusions directly relate to them. More sophisticated models refer to Earth planets similar to all planets in the Earth. So, the work is boundless.

- Dear Professor, thank you very much for the interesting conversation.