The loss of the four young men is extremely sad and we share grief of their families – British journalist
Read: 1785

Hubble captured a sculped galaxy that is moving away from us
Read: 439 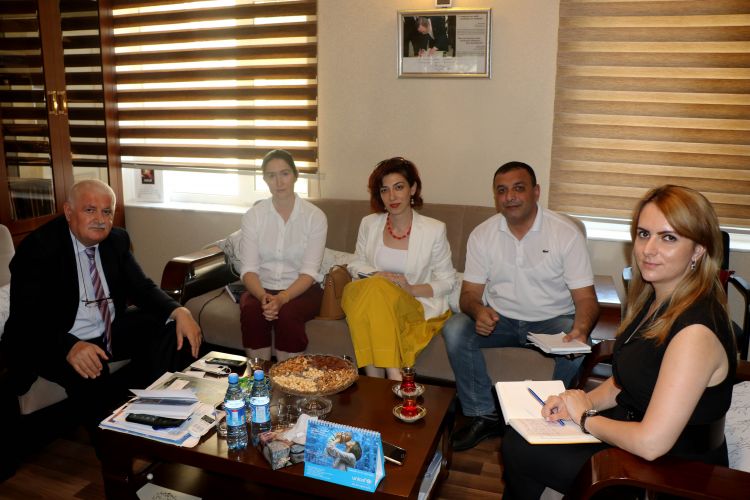 Public Affairs Officer Michele Petersen and Grants Coordinator Nigar Aliyeva from the Embassy of the United States of America in Azerbaijan visited the office of the International Eurasia Press Fund (IEPF) and met with the president Umud Mirzayev, Eurasia Diary reports.

The guests were informed about the current projects of the IEPF, being implemented in partnership with the local and international partners. Moreover, U.Mirzayev spoke about the Vocational Training Center (VTC), established in Terter region of Azerbaijan, in 2010, with the financial support of the U.S. Department of State, about its modern facilities as well as about the training being held there.

IEPF President relied to the historical roots of close cooperation between the IEPF and the U.S. Department of State, U.S. Embassy in Baku, civil society organizations, media outlets and experts from the United States. The mutual humanitarian projects aim to support the community development, peacebuilding, and sustainable development in the war-affected regions of Azerbaijan, improvement of social and economic welfare of the people, social reintegration of people suffered from the war, human rights protection.

Umud Mirzayev also informed Public Affairs Officer Michele Petersen about the current situation around the Armenia-Azerbaijan Nagorno-Karabakh conflict and about the difficulties of those people who live in the frontline regions. He said that this conflict requires more international attention to be paid on its resolution.

Michele Petersen thanked IEPF president for the invitation and expressed her satisfaction with the results of mutual work with the Embassy. She spoke about the possibilities of collaboration in provision of English language courses in the VTC for refugees and IDPs from the war-affected regions of Azerbaijan.

Being impressed with what she heard about the refugees and IDPs, suffering from the conflict, Public Affairs Officer supported the idea to think together on possible projects to be implemented in the regions.

The meeting was also attended by the IEPF vice president Ramil Azizov and assistant to IEPF president Anastasia Lavrina.