Russia will not let UNSC become toy in hands of US - Russian Diplomat
Read: 601 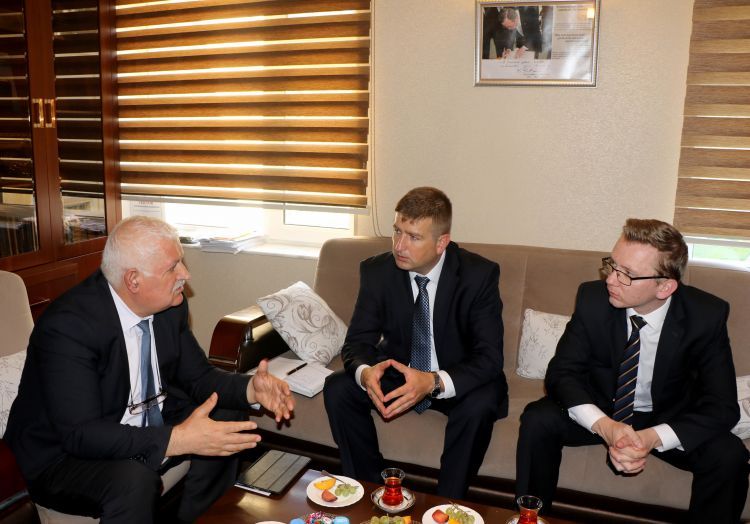 On August 15, representatives of the Embassy of Ukraine in Azerbaijan 1st Secretary for Political Affairs Dmytro Berezhnyi and Chief Koval Stanislav Koval visited the office of the International Eurasia Press Fund (IEPF) and met with the president of the Fund Umud Mirzayev.

According to Eurasia Diary, during the meeting, parties exchanged views on issues of mutual interest, and discussed options for expanding long-term cooperation. Umud Mirzayev informed Dmytro Berezhnyi, newly appointed 1st Secretary for Political Affairs, about the history of the organization, its activities in various fields and the numerous projects implemented by the IEPF. The organization has long experience of working with representatives of diplomatic missions, including the Embassy of Ukraine in Azerbaijan, UN agencies and various international organizations. He aslo spoke about Eurasia Diary, international analytical information gateway, which operates in five languages ​​(Azerbaijani, English, Russian, Turkish and Arabic).
The Embassy staff expressed interest in expanding the partnership. They emphasized the importance of humanitarian and social projects implemented by the organization in the frontline regions of Azerbaijan. Azerbaijan’s unique experience in working with refugees and IDPs that appeared in Azerbaijan as a result of the aggressive policy of neighboring Armenia against Azerbaijan was also noted.
At the end of the meeting, the guests got acquainted with a photo exhibition demonstrating the consequences of the Armenian aggression against Azerbaijan, destroyed architectural monuments, destroyed residential buildings, environmental violations in the occupied territory and shot cemeteries. A film made by the İEPF on the life of children in the regions of Azerbaijan affected by the war was also shown.
Those seen at the exhibition, did not leave anyone unimpressive.