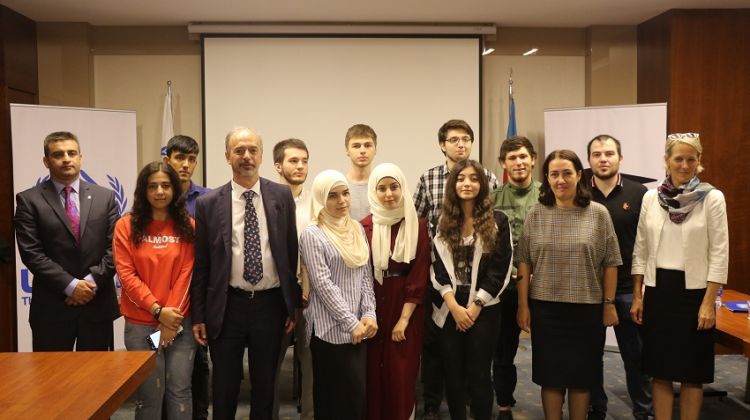 Today, the UNHCR Country Representative in Azerbaijan Guido Ambroso and the German Ambassador Wolfgang Manig met with nine refugee students who have recently been selected to accept scholarships covering their expenses for higher education under the DAFI (Albert Einstein German Academic Refugee Initiative) programme of UNHCR which is funded by the Federal Government of Germany, Eurasia Diary reports.

UNHCR’s higher education scholarship programme, DAFI plays an integral role in enabling refugees worldwide to access higher education. Since its inception in 1992, the programme has supported more than 15,500 refugee students to study at universities and colleges in over 50 countries of asylum, including Azerbaijan. DAFI Programme started to operate in Azerbaijan in 2010, so far 36 young refugees have been supported, including nine selected recently on the eve of the start of the 2019-2020 academic year.

In his speech at the meeting, the UNHCR Country Representative Guido Ambroso highlighted the importance and role of education in enabling refugees to rebuild their lives. “Promoting human potential through increased opportunities for quality education and livelihoods, is one of UNHCR’s Global Strategic Priorities and is in line with Sustainable Development Goal 4 (SDG4) which aims at free and quality education,” he said. The Representative also expressed his gratitude to the Government of Azerbaijan for allowing the persons in need of international protection to stay in the country and shared his positive expectation that refugees under UNHCR’s mandate will soon have the legal right to work which will allow them to contribute to the development of the country. Then Guido Ambroso addressed his appreciation to the International Bank of Azerbaijan for the free of charge provision of ATM cards to the refugees receiving cash assistance from UNHCR, including the students supported through the DAFI programme.

The German Ambassador Wolfgang Manig congratulated the students and wished them success in their higher education. "We are proud and grateful to support young and talented students in fully developing their potential and give them a life perspective" said the Ambassador.

The Head of the Refugee Status Determination Department of the Azerbaijani State Migration Service Aydan Seyidova highlighted the measures taken by the Government of Azerbaijan in improving the quality of protection and services offered to migrants, refugees and asylum seekers in Azerbaijan.

The event was attended also by the parents of the newly selected students and refugee community representatives who appreciated the generous support of the German Government through UNHCR in addressing key barriers for their children to acquire higher education. They also appreciated the warm welcoming atmosphere enjoyed by refugees in Azerbaijan and praised the tolerance and hospitality of the hosting community.

UNHCR established its presence in Azerbaijan in December 1992 as part of UNHCR’s first emergency assistance operation in the former Soviet Union. The agency is mandated to ensure that everybody has the right to seek asylum and find safe refuge, having fled violence, persecution, war or disaster at home. Since 1950, the Agency has faced multiple crises on multiple continents, and provided vital assistance to refugees, asylum-seekers, internally displaced and stateless people.