Many Azerbaijanis cite the story of Albert Agarunov as a sign that the country’s Jews are integrated as citizens with the same rights and responsibilities as their Muslim compatriots. 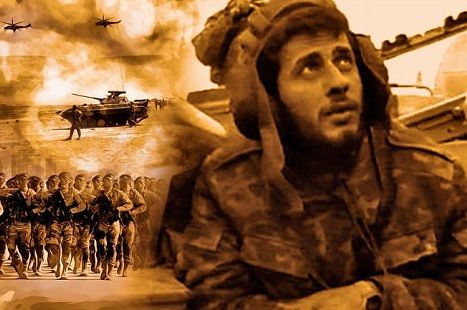 Eurasia Diary published the article of Diana Cohen Altman, Principal of Cultural Diplomacy Associates, L.L.C., the former executive director of the Karabakh Foundation, a cultural charity organization that preserves and disseminates the heritage and traditions of Azerbaijan and the Caucasus area. She previously directed the B’nai B’rith National Jewish Museum and Archive. More than 25 years after his death in battle, a state-recognized Jewish hero of a Muslim-majority nation illustrates a contemporary vision for warm relations between those two faiths.
The Eurasian nation of Azerbaijan recently erected a monument in the capital of Baku in commemoration of Albert Agarunov (1969-1992)—one of the first citizens to posthumously receive his government’s highest military recognition, the National Hero of Azerbaijan.
A casualty of the 1988-1994 Nagorno-Karabakh war, Agarunov earned his status among the Azerbaijani people as a proud Jewish citizen of his newly independent post-Soviet state. While the conflict between Armenia and Azerbaijan over the Nagorno-Karabakh territory persists to this day, Azerbaijani discussions of this struggle invariably circle back to Agarunov.
Azerbaijan’s population is more than 90 percent Muslim. Agarunov was a member of the community known as Mountain Jews in the region of Quba in northern Azerbaijan. On Dec. 8, 1991, he and his colleague, Agababa Huseynov, disabled several Armenian tanks and armored trucks.
Armenia set a bounty on Agarunov’s head. In May 1992, Agarunov, 23, was killed while trying to save his fellow soldiers as they defended the Azerbaijani town of Shusha, which Azerbaijan cherished as its historic cultural capital in the Nagorno-Karabakh region.
At the time, journalists who asked what brought Agarunov, a Baku native, to volunteer to defend a town in Nagorno-Karabakh heard him say, “This is my land. I don’t have another motherland. It’s natural for me to defend my home.”
Decades later, many Azerbaijanis appear to identify with Agarunov as a de facto member of their family and community, specifically looking to his life story. At a young age, Agarunov was admired by his peers and mentors alike, including the faculty of the music school he attended (he took trumpet lessons). Fellow students appreciated his readiness to stand up to bullies. Family and friends described him as having a simple philosophy of life: focus on family, work hard to give your family a good life, serve your community and keep the peace, but defend those who cannot defend themselves.
Agarunov viewed Azerbaijan as a motherland that was closely entwined with his Jewish community. Still, his decision to fight in the Nagorno-Karabakh War startled his family. His parents and siblings shared his patriotism, though feared for his safety in this battle between nations as the breakaway from the Soviet Union was unfolding.
When news of Agarunov’s death reached his family in 1992, they found consolation in the actions of Azerbaijan’s government and people. The community renamed the music school young Albert had attended in his honor. Plaques appeared in Baku and in Quba. Citizens shared news of the Azerbaijani army’s renaming of Agarunov’s tank in his honor. To this day, Azerbaijanis demonstrate feelings of solidarity and appreciation in messages to his family.
Many Azerbaijanis are quick to bring up Agarunov’s Jewishness as an example of “two great nations working together.” In the same breath, they cite Agarunov’s story as a sign that Azerbaijan’s Jews are integrated as citizens with the same rights and responsibilities as their Muslim compatriots.
Regularly, the discussion leads to remarks about the absence of anti-Semitism in Azerbaijan, often backed up by affirmations such as Israeli Prime Minister Benjamin Netanyahu’s statement that Israel-Azerbaijan ties represent “something that we can show the world.”
Indeed, in a world beset by ethnic and religious conflict, the visitors who witness the new monument in Baku will learn of a life story that provides a paradigm for unlocking the potential of thriving interfaith relations. Observers can also look to Quba, where Muslim and Jewish musicians come together to continue the dynamic musical tradition that once energized a young Agarunov.
At its heart, Agarunov’s story reveals that genuine interpersonal relationships and shared passion for one’s homeland can serve to bridge differences and unite even the most improbable allies.