Azerbaijan has right to use its armed forces to take back its legally acknowledged territory - British journalist
Read: 5069 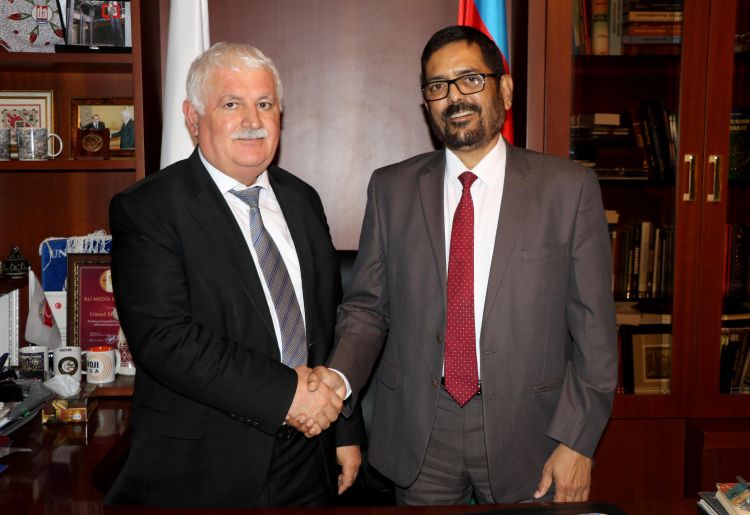 On 19 November the president of the International Eurasia Press Fund (IEPF) Umud Mirzayev received Sujesh Chandra Sinha, the Second Secretary at the Embassy of India in Azerbaijan. Eurasia Diary informs that the meeting was held in the IEPF office and passed with the participation of Eurasia Diary editorial team. U. Mirzayev welcomed the official of the Embassy with his introductory speech about the key working areas of the International Eurasia Press Fund and its activities over the past 27 years. He mentioned the IEPF as one of 140 NGOs out of 131,000, which enjoy General Consultative status with the UN Economic and Social Council.

While introducing himself, the IEPF president also emphasised his birthplace, which was occupied by Armenia during its occupational policy against Azerbaijan. He also touched upon Azerbaijan’s major problem Nagorno-Karabakh conflict that needs to be highlighted in public eyes.

“Many countries and officials receive totally wrong information concerning Nagorno-Karabakh which is integral part of Azerbaijan. However it is clear and visible to understand that Armenia has started to expand occupation of Karabakh in 1989 when more than 300,000 ethical Azerbaijanis were deported from Armenia to Azerbaijan”, the IEPF president added.

In his turn, Sujesh Chandra Sinha expressed his gratitude for welcoming and for the provided information. He spoke about the possible ways of cooperation to be developed between two sides.

“We have strong collaboration with the Azerbaijan University of Language in Baku, where around 17 Azerbaijani students are learning Hindii by specially appointed Hindi teacher from India. We have many education and training programmes that we extend to the students and nationals of Azerbaijan through our partnership and collaboration.  We are also going to have Memorandum of Understandings with Baku Engineering University and Lankaran State University very soon. Government of India has many Scholarships for the students of Azerbaijan under the programmes of Indian Council of cultural Relation (ICCR) which can be availed by the Azerbainjani students". Mr. Sujesh also offered to have collaboration with the Eursia Education Centre founded by IEPF.

“The Embassy of India also would like to invite journalists from Azerbaijan and India as an inter-exchange of knowledge and experience among professional journalists”, he added.

At the end of the meeting the official of the Embassy viewed a film about the life of children in the war-affected regions of Azerbaijan. The IEPF President Umud Mirzayev also presented the guest several posts describing conflict zones in dire plight and terror acts that committed by Armenian occupants.