" Now, Armenians have two choices: Either they accept the situation or leave the country " - Rovshan Ibrahimov
Read: 363

Defense Minister meets with the Commander of the peacekeeping forces deployed in the Nagorno-Karabakh region of Azerbaijan
Read: 262 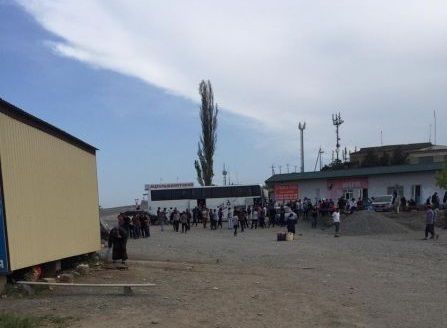 For the fourth day now, Azerbaijani citizens have been conducting a mass hunger strike in the border village of Kullar of Dagestan.

The action is held under the slogan "We want to go home!".

As EDnews.net reports that about 200 people take part in a hunger strike constantly or in shifts.

People demand from the authorities of Azerbaijan and Russia an early pass through the border.

Many of them live on the border for more than one month.

Over the past 20 days, 271 people passed through the border in three parties. Nevertheless, due to new arrivals, about 650-700 people still accumulated on the border.

Half of them live in a camp, the rest do in private cars, unfinished buildings, tents constructed from cellophane from improvised places.

“We are tired of living here in the field. It’s unbearably hot during the day, there is no opportunity to swim, there is no proper nutrition, many have no money left,” said one of the residents of the camp.