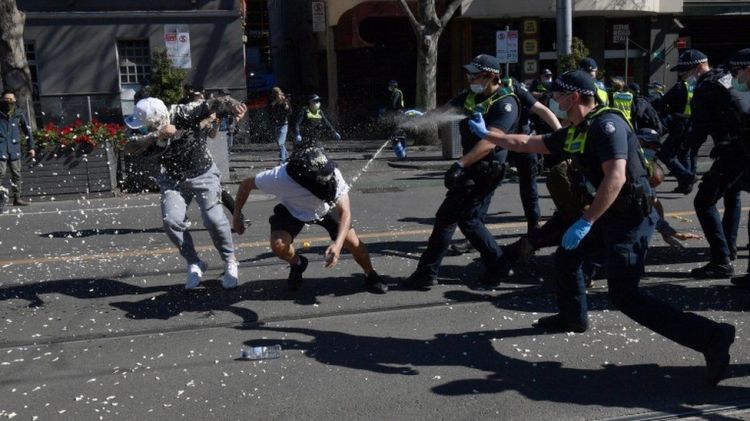 Australian police detained hundreds of people Saturday following anti-lockdown protests across the country, with massive clashes between authorities and demonstrators injuring several officers.
Out of the roughly 700 people who gathered in the city of Melbourne in opposition to continued coronavirus-era restrictions, at least 235 people were arrested, with an additional 32 people brought into custody in Sydney, according to Reuters.
Video footage shared on social media showed demonstrators at a “Rally for Freedom” in Melbourne breaking through a police line before officers began deploying pepper spray to try to push back protesters.
Reuters reported that a total of 2,000 officers were deployed to parts of Melbourne to try to contain the protests, with CNN noting that at least 10 officers suffered injuries as a result of the clashes.
Mark Galliott, police commander for Melbourne’s state of Victoria, told reporters Saturday, "What we saw today was a group of protesters that came together, not to protest freedoms, but simply to take on and have a fight with the police.”
"That's what we saw were angry, aggressive young males, they had to fight the police not to protest about freedom,” he explained.
Sydney, Melbourne and the Australian capital city of Canberra, have for weeks remained under strict coronavirus lockdown measures due to a recent outbreak of the highly contagious delta variant, sparking weeks of protests that have resulted in hundreds of arrests and clashes between demonstrators and police.
Late last month, Australian police said they had arrested more than 250 people within a single day as people gathered across multiple cities calling for the government to lift the lockdown measures.
According to Reuters, the Australian government has said that most of the restrictions across Victoria, New South Wales and Canberra will stay in place until at least 70 percent of the population ages 16 and older have been fully vaccinated against COVID-19.
While a majority of Australia’s population supports vaccinations and public health orders, a small but vocal minority has continued to push back on the measures.
Galliott said Saturday that in order for people to get back to their normal lives and activities, more people across the country need to get the coronavirus vaccine.
"Once we do that we would be out and about enjoying summer, enjoying Christmas, enjoying times with families,” he said, according to CNN, adding that protesting “does nothing to advance any course.”
Though Australia has been successful at keeping coronavirus cases relatively low compared to some other countries, a significant portion of the population remains unvaccinated, with just about 47 percent of the country fully vaccinated as of Saturday, according to data.