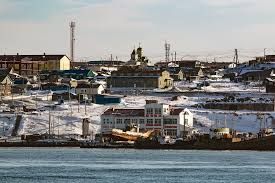 Japan’s territorial claims to Russia regarding the southern Kuril Islands are to be settled by Tokyo and Moscow independently, on a bilateral basis, Chinese Foreign Ministry Spokesperson Zhao Lijian told a briefing on Tuesday.
"We know about this. This is an issue of Russian-Japanese relations that should be settled by the two sides," the diplomat said when asked to comment on Japan’s protest over a visit by the Russian prime minister to the Iturup Island.
"At the same time, China has always been confident that the outcome of the victory in the World Anti-Fascist War (this is what WWII is called in China) must be duly respected and complied with," the spokesman stressed.
On Monday, Russian Prime Minister Mikhail Mishustin embarked on a working trip to the Far East and Siberia. On the first leg of the trip, Mishustin traveled to the Kuril Archipelago, namely Iturup Island. Here the prime minister visited a clinic and inspected a fish processing facility.
President Vladimir Putin earlier requested that he pay particular attention to the southern Kuril Islands during the trip. Putin pointed out that Russia had long been in talks with Tokyo on creating "conditions for economic entities" there. The president also announced "unique and unprecedented" proposals to involve Japan in the economic activity of the Kuril Islands. The initiatives will be finalized after Mishustin’s trip, Putin explained.
On Monday, Japan’s Chief Cabinet Secretary Katsunobu Kato told reporters that Japan would lodge a protest over the Russian prime minister’s "regrettable" visit to Iturup. According to him, the visit runs counter to Tokyo’s consistent stance on the Northern Territories (Japan’s term for Russia’s southern Kuril Islands). He also said that the Japanese government would continue to collect and analyze information on that trip.
Russian Ambassador to Japan Mikhail Galuzin was summoned to the Japanese Foreign Ministry, where First Deputy Foreign Minister Takeo Mori voiced a protest to him over Mikhail Mishustin’s working trip to Iturup Island. The diplomat told journalists later that Russia dismissed Japan’s protest.
For decades, Moscow and Tokyo have been holding consultations in order to clinch a peace treaty as a follow-up to World War II. The southern Kuril Islands issue remains the key sticking point. In 1945, the whole archipelago was handed over to the Soviet Union. Tokyo laid claims to Iturup, Kunashir, Shikotan and a group of uninhabited islands. The Russian Foreign Ministry has repeatedly stated that Moscow’s sovereignty over the islands is enshrined in international law and cannot be called into question.