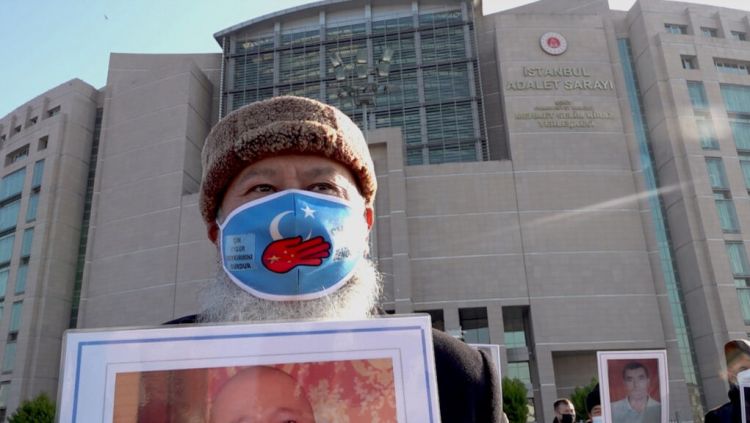 Nineteen members of the Uyghur diaspora in Turkey have filed a criminal complaint against Chinese officials with the İstanbul Chief Public Prosecutor’s Office, saying China has been committing acts of genocide, torture, rape and crimes against humanity, Reuters reported on Tuesday.
Lawyer Gülden Sönmez said it was necessary because international organizations had not acted against Chinese authorities.
China’s treatment of the Uyghurs has drawn international condemnation, with human rights groups estimating that some 1 million Uyghurs have been arbitrarily incarcerated in a network of prison camps. There have also been reports of forced sterilization, systematic torture and rape.
Turkey has been a destination for thousands of Uyghurs fleeing China and is home to a sizable Uyghur diaspora. An estimated 50,000 Uyghurs are currently living in Turkey, making it the largest Uyghur diaspora in the world.
In the official complaint relating to 116 people who the complainants say are still detained in China, 112 Chinese officials, including members of the Chinese Communist Party, directors and officers at labor camps, are accused of facilitating forced labor by detaining around a million Uyghurs and other primarily Muslim minorities in camps since 2016.
China initially denied the camps existed but has since said they are vocational centers and are designed to combat extremism. It denies all accusations of abuse.
“The international criminal court should have already started this trial, but China is a member of the [United Nations] Security Council and it does not seem possible within this dynamic,” Sönmez said.
Sönmez, surrounded by more than 50 people holding photos of missing family members and signs calling for the prosecution of Chinese officials, said: “Turkish legislation recognizes universal jurisdiction. Torture, genocide, rape [and] crimes against humanity can be prosecuted in Turkish courts and criminals can be tried.”
Medine Nazimi, one of those who filed the criminal complaint, said her sister had been taken away in 2017 and she had not been heard from since. “My sister and I are Turkish citizens so I want my government to rescue my sister,” she said.
Although the Uyghurs have sought refuge in Turkey because of their shared cultural ties, Turkey has become less vocal about the plight of the Uyghurs in recent years as it has developed economic ties with China.
A report released by Human Rights Watch in April 2021 identified a range of abuses against Uyghurs that amount to offenses committed as part of a widespread and systematic attack directed against a population: mass arbitrary detention, torture, enforced disappearances, mass surveillance, cultural and religious erasure, separation of families, forced returns to China, forced labor and sexual violence and violations of reproductive rights.
The Chinese Communist Party (CCP) denies committing atrocities and abuses against the Uyghurs despite a growing body of evidence. The Chinese government has steadfastly resisted calls to admit independent monitors into the region, allowing only carefully stage-managed tours for select journalists and diplomats.
Resolutions passed by the Dutch, Canadian and British parliaments called China’s repression of Uyghurs “genocide.”
The United States, the European Union, Britain and Canada in March imposed sanctions on several Chinese officials for human rights abuses against the Uyghurs.