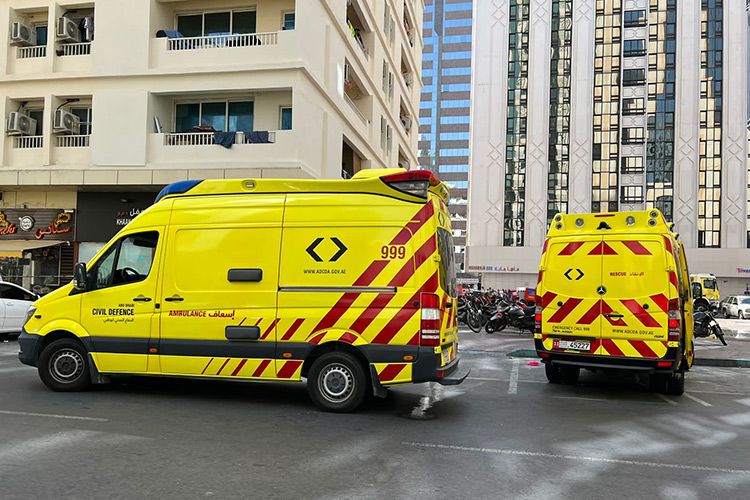 A fire breaks out in Al Zahiyah area of Abu Dhabi on Friday afternoon.
The Abu Dhabi Police said on Twitter, “Teams of Abu Dhabi Police and Abu Dhabi Civil Defense are dealing with a fire that broke out this Friday in Al Zahia area in Abu Dhabi.”
Several Civil Defense engines were on the site to douse the flames.
The authorities said that fire broke out in a 30-storey building.
The police said 19 people were injuries in the fire. The injuries range from mild to moderate. They were transferred to the hospital to receive the necessary treatment.
The police said on Twitter, “We will keep you posted on developments. Abu Dhabi Police also calls on the public not to circulate rumors about the accident and to seek information from its official sources. @Adcda997.”
The building has been evacuated as a precaution for residents’ safety.
The cause of the fire is not yet known.
The authorities have cleared the nearby area to speed up the process.
The police said on Twitter, “The teams of Abu Dhabi Police and the Abu Dhabi Civil Defense continue to deal with a fire in the Al Zahiyah area of Abu Dhabi that broke out in a 30-storey building…”
In May, at least 120 people were injured in a gas cylinder explosion in a restaurant in Abu Dhabi.
The police said that two people died in the explosion.
The authorities said, “64 people were injured with minor injuries, and 56 others sustained moderate injuries, and 2 people died.”
The authorities said that incident took place at Al Khalidiya area.
Investigation revealed that fire at restaurant was a result of a gas cylinder explosion.
They police called on the public to obtain information about the any accident from official sources.