Tehran convenes allies against threats that include US | Eurasia Diary - ednews.net

Tehran convenes allies against threats that include US 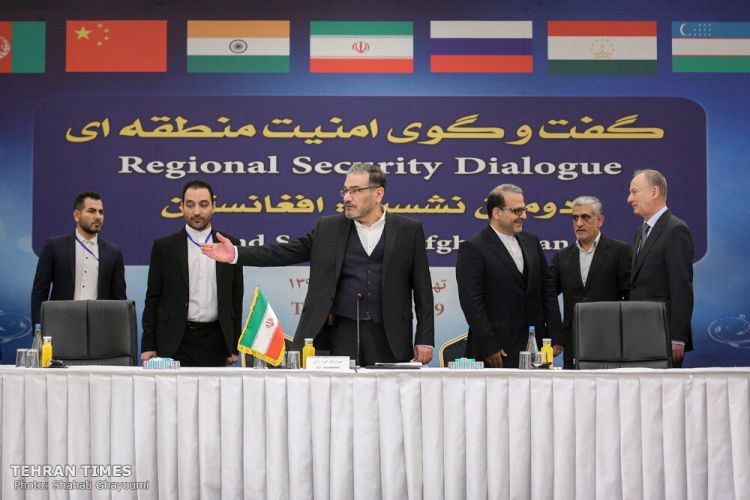 Afghanistan was the main focus of the second Regional Security Dialogue, held Dec. 18 in Tehran and attended by national security officials from Russia, China, India, Afghanistan, Tajikistan and Uzbekistan.

Many issues in Afghanistan pose threats to the entire region and therefore are of common concern to all the participating countries, including drug and arms trafficking, illegal immigration, extremism, political and sectarian tensions, terrorism and the presence of foreign forces — especially those of the United States.

The meeting was called to coordinate and strengthen regional cooperation and define a collective mechanism to deal with those threats. Two issues in particular stood out: terrorism and the US presence in Afghanistan, which Tehran and some participants believe are closely linked.

The first session of the Regional Security Dialogue was held in September 2018 in Tehran, aiming to increase coordination among regional countries to stand against terrorism. What compelled Iran to focus again on Afghanistan and terrorism in the second session is the possible US agreement with the Taliban, potential withdrawal or reduction of US forces in Afghanistan, and the alleged transfer of Islamic State (IS) forces from Iraq and Syria to Afghanistan, all of which could exacerbate emerging threats from Afghanistan and fuel further instability and threats to Iran and the region.

Iran aims to contribute to national unity within Afghanistan and strengthen regional cooperation to deal with the threats. All the participating countries, including Uzbekistan and Tajikistan — which attended the event for the first time — concurred with the need to address the issues. To achieve the goals, the participants agreed to hold the Regional Security Dialogue annually and define ways to implement agreements.

In general, the goals Iran pursued at the meeting can be divided into regional and international levels.

Regionally, Iran sought to develop a model for political and security cooperation without the United States and to introduce itself as an initiator of regional cooperation and integration. This is related to Iran's grand strategy of inter-regional stability and security without external interference. Iran's proposed Hormuz Peace Endeavor also comes in this context.

In this regard, while emphasizing the need to strengthen bilateral and multilateral security relations in the region, Iran insists that any initiative on Afghanistan should be centered on the Afghan government. Accordingly, Iran is negotiating with the Taliban in coordination with the Afghan government, aiming to facilitate inter-Afghani dialogue. Iranian Foreign Minister Mohammad Javad Zarif insists Tehran is opposed to US-Taliban talks because Washington has ignored the Afghan government.

At the Regional Security Dialogue, Afghan national security adviser Hamdollah Moheb reaffirmed Iran's position and emphasized the need to support Afghan security forces, which he said is the only option for stability there.

In Iran’s model of regional security, all countries involved in the Afghanistan issue would use their strengths to help stabilize the country: Russia, politically and militarily; China and India, economically; and Iran, politically, militarily, economically and socially. In this regard, Iran supports China's proposal to use regional organizations, including the Shanghai Cooperation Organization, to promote peace in Afghanistan.

At the same time, if the United States weakens in Afghanistan and the region, Iran can strengthen its security and deterrence capability. In Iran, especially among conservatives, there’s the assumption that the United States blames Iran for Washington’s failures in the region, including Syria, and that Washington is seeking to retaliate and pressure Iran.

Tehran accuses the United States of seeking to destabilize Iran by supporting the violent November protests in Iran and inciting protests against Iran in Iraq and Lebanon. In this regard, there is also an assumption that the United States is going to strengthen IS in Afghanistan and use that country as a platform to exert pressure on Iran.

Bringing up old allegations — charges the United States dismisses as conspiracy theories — that the United States is planning to transfer IS members from Iraq and Syria to Afghanistan, Secretary of the Supreme National Security Council Ali Shamkhani accused the United States of trying to use the situation in Afghanistan to "create insecurity on the borders of China, Russia and Iran.”

Therefore, Iran emphasized at the Tehran meeting the need to strengthen regional security and intelligence cooperation to keep IS from consolidating power in Afghanistan. Toward this end, Shamkhani said, Iran will sign a comprehensive security cooperation agreement for Afghanistan to use Iran's military and security capabilities such as drones against terrorists.

Highlighting the US failure in Afghanistan is another Iranian goal. Many Iranian officials believe the US presence in Afghanistan for nearly two decades resulted in nothing more than an increase in terrorism, violence, instability, insecurity and drug trafficking. Accordingly, they consider US troop withdrawal a key precondition for consolidating security and stability in Afghanistan and the region. Iranian armed forces Chief of Staff Mohammad Hossein Bagheri told the media, “Instability is a pretext for the US presence in the region. If the region is calm, the US should leave.”

Another of Iran’s goals is to show that US efforts to isolate it are ineffective. By holding the Regional Security Dialogue in Tehran, Iran demonstrated it can actively participate in political and security processes in the region. The presence of Russia, China, India and Iran’s neighboring countries at the event shows that the US effort to isolate Iran has not succeeded. Tehran considers this approach "active resistance" to US pressure.

Yet another of Iran's goals is to strengthen political and security cooperation with Russia and China. This aim is in line with Iran's larger foreign policy goal of expanding relations with Eurasian powers that are not cozy with the West. In his recent visit to Malaysia and Japan, Iranian President Hassan Rouhani emphasized this approach, noting the importance of Iran’s "Look to the East" policy.

Among the countries participating in the Regional Security Dialogue, Russia has the most in common with Iran in theory and practice, which is evident in Syria. Moscow and Tehran also share views on the need for practical action to address Afghanistan-based threats from drug trafficking to Islamic extremism. Noting that Russia is one of the key pillars of the Security Dialogue, Shamkhani reiterated, “We are politically cooperating with Russia, combating terrorism and empowering the Afghan government in the fight against terrorism, and have common concerns about US efforts to destabilize common borders."

Russian Security Council Secretary Nikolai Patrushev’s words confirm the similarity between Iran and Russia’s positions. He insists there is evidence the United States is involved in helping IS forces reach Afghanistan. Like Iranian officials, he also emphasizes that negotiations should be held directly between the Taliban and the Afghan government to achieve a national solution to the current situation.

Tehran wants to reproduce the Iran-Russia cooperation model in Syria to counter the same threats in Afghanistan. At the same time, Iran is keen to use Syria and Afghanistan as platforms to forge broader relations with Russia, especially to strengthen deterrence against the United States. Security agreements and meetings between the two countries' military and security officials indicate Moscow is willing to expand relations with Iran, too.

For example, Russian Foreign Intelligence Service Director Sergey Naryshkin, during his Dec. 11 visit to Tehran, held negotiations with Iranian intelligence and security officials about strengthening bilateral cooperation in the fight against terrorism. There are numerous open and covert military and security agreements between the two countries for cooperation in a vast geographic expanse from the Caspian Sea to the Middle East, the Persian Gulf and Afghanistan. In this context, a joint Iran-Russia-China maneuver is set to begin Dec. 27 in the Persian Gulf.