What is chance of Iran for war against US? | Eurasia Diary - ednews.net

What is chance of Iran for war against US? 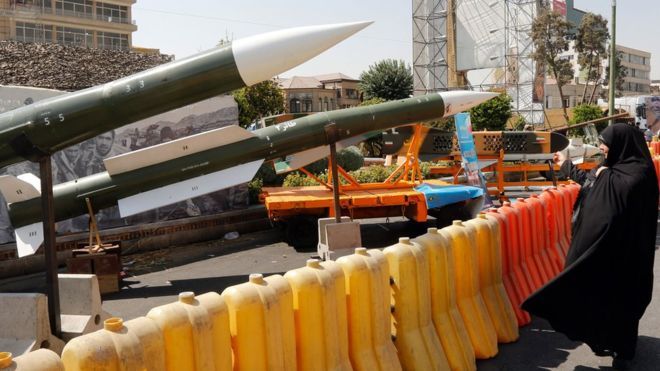 Extremely rising tensions in the Middle East between the US and Iran put some questions about the military capability of Iran.

In the case of military confrontation, Iran's main power is its missiles. US Defence Intelligence Agency posted a photo of the radius of Iran's missiles.

The photo demonstrates to us that Iran is the country's missile force as the largest in the Middle East.

The only way to prevent the US military is to use missiles. Iran has 1,900 rocket projectors more than the US (1,056). We shouldn't forget about the nuclear missiles of the US. The US is considered the only state which used  nuclear weapon at the war (Hiroshima and Nagasaki). It means, if the US feels extreme danger, the possibility of the use of nuclear weapons could be unavoidable. But, quality speaks louder than numbers. Today we have seen it is not a valid way, so that 22 missiles fired and only 15 of them could hit the target. Iran's chance for victory is obviously lower than the US. Remembering that Iran has already lost the most capable general Qasem Soleimani.

The loss of such a general will negatively affect Iran in case of war with the US. Soleimani was very successful in Iran's proxies in the Middle East. Military groups in the Middle East are another main source of power for Iran. After the US airstrike, Iran has deprived of such a key to victory.

Noting that US has several bases around Iran conisting of more than 50,000 military personnel. It gives the US to prevent attacks from Iran-backed military groups and to make immediate response to Iran directly.

Taking into point of such features, we could say that Iran's chance against the US apparently very weak.