Putin does not want to control Ukraine, he wants to destroy it - Paul Goble - ednews.net

Putin does not want to control Ukraine, he wants to destroy it - Paul Goble 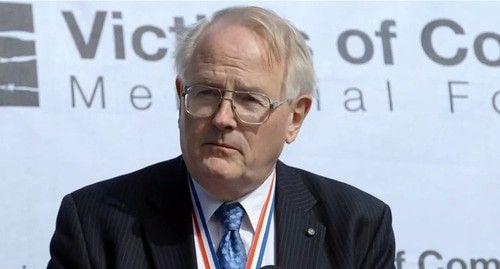 “The Russian army may occupy the country but it won’t control it. A partisan war will begin and last for years, bleeding Russia white”, said Paul Goble.

Speaking to Eurasia Diary, Paul Goble, a former advisor of the State Department on the Soviet Union and Russia, expressed his opinion on the outcome of Russia-Ukraine war.

In his comments, he believed that Russia’s war in Ukraine might cause the country to be razed to the ground.

“At some point, some in Russia will decide that this is a game that isn’t worth it and that Putin must be pushed aside. That could happen soon or late. I hope it happens soon as otherwise so many Ukrainians will die bombed back to the Stone Age with the same tactics Putin used in Chechnya”.

According to American expert, the victory of the Russian army in the Ukraine war will invigorate Russia to launch attacks on other countries in the near future.

“Russia is an aggressor, and making concessions to Putin would only encourage him to attack others. Moreover, Ukrainians now would rather die than live under him”.

Ukraine President Volodimir Zelenskyy said in his press conference that Ukraine would further have no intention to join NATO. While touching upon his opinion, some experts believe that NATO has failed in defending Ukraine from Russian aggression.

However, Paul Golbe denied all claims and said that NATO did not bear responsibility for protecting Ukraine.

“Ukraine is not now a member of NATO and so NATO does not have an obligation to defend it as it would if Ukraine were a member. I would like to see Ukraine in the alliance. Zelenskyy clearly thinks that saying something like this may influence Putin. I don’t think Putin will be much influenced. He doesn’t want to control Ukraine, he wants to destroy it”.

Commenting on what measures NATO will carry out in the Eastern Europe after the end of the Russia-Ukraine war, he believed that NATO has one important purpose to keep Russia out of Europe.

“I hope that there is a recognition that NATO’s original purposes – keeping Russia out of Europe, strengthening the US in Europe, and preventing Germany from dominating Europe – remain critically important and that the alliance should expand to include all countries threatened from the east. I don’t know whether that will happen but it should”.

In conclusion, Paul Goble said that Moldova would be the next country facing Russian aggression after Ukraine.

Moldovan President Maia Sandu said that Chisinau continues to insist on the withdrawal of the Russian military from the territory of Moldova.

It should be noted that the Transnistrian conflict in Moldova is one of the long-term unsolved conflicts in the post-soviet zone.

“Putin will attack somewhere else if he has to stop in Ukraine without an admission of defeat and a withdrawal. If Russian troops reach Moldova and especially its breakaway province of Transnistria, Moldova is a very likely next target,” Goble said.