Azerbaijan has right to use its armed forces to take back its legally acknowledged territory - British journalist
Read: 2676 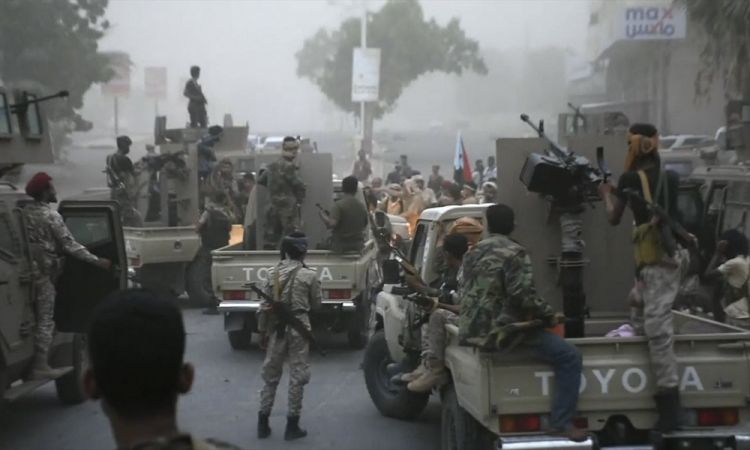 “Scores” of people were killed and hundreds wounded during recent fighting in Yemen’s key port of Aden when southern separatists – trained by the UAE – seized key locations of the city from Saudi-backed government forces.
The International Committee of the Red Cross (ICRC) in Aden told the Guardian that large parts of the city were also left without electricity and water during the fighting after services were targeted. Humanitarian staff warned that any further fighting between forces allied with the two coalition partners would be “devastating”.
The clashes, which pitted the forces backed by the two erstwhile Gulf allies in the Saudi-led coalition in Yemen against each other, have further complicated what is already the world’s worst humanitarian catastrophe, threatening a “new civil war within a civil war”, according to the thinktank Crisis Group.
In a chilling assessment of the recent bout of hostilities, Crisis Group added: “The fighting in Aden is not the first standoff between Saudi-backed and UAE-backed forces in Yemen but, if it continues, it could be the most destructive.
“If tensions in Aden cannot be eased, the risk is high that they will spread to other parts of the south.”
Describing the fallout of the latest violence, the ICRC described perilous conditions for civilians and first aiders in the port city during the height of the fighting, as Abu Dhabi’s crown prince, Mohammed bin Zayed al-Nahyan, met Saudi Arabia’s King Salman on Monday to try to defuse friction between the two allies.
According to Mathias Kempf, the ICRC’s head of mission in Aden, its staff were finally able to visit two hospitals in the city.
“The escalation when it happened was very sudden,” Kempf told the Guardian from Aden, adding that staff were unable to move for several days as battles raged in many areas of the city.
Although he said the situation had stabilised since Sunday, he described enormous difficulties for those injured in reaching medical facilities during the peak of the violence.
“Movement was almost impossible with shooting on going in many parts of town – with all calibres of weapons – and ambulances could not move. Because of that, the hospitals did not get an influx until the fighting started to die down.”
Tamuna Sabadze, deputy director of operations for the International Rescue Committee in Aden, said that fighters allied with the Southern Transitional Council now controlled most of the city.
“Their forces control the key parts of Aden – all the military camps and the presidential palace, and they already controlled the airport,” said Sabadze, adding that only a small part of the city was now controlled by Saudi-backed government forces. A member of Yemen’s southern separatists holds his weapon with a picture of Brigadier General Muneer al-Yafee, killed in a Houthi missile attack, in Aden. Photograph: Fawaz Salman/Reuters
She added: “The situation has definitely become more dynamic and unpredictable.
“From a humanitarian perspective that will have implications on everything from the importation of humanitarian supplies to dealing with different ministries to facilitate work.
“We knew that divisions existed between the coalition partners because of the different interests Saudi Arabia and the UAE had in the region. But any further fighting and exacerbation between the warring parties would be devastating for Yemen.”
The latest outbreak of fighting has compounded an already desperate humanitarian situation in a country where, according to the UN, 22.2 million people need some kind of assistance, including about 8.4 million people who are at risk of starvation.
Aden had been the temporary seat of the internationally backed government of Abd Rabbu Mansour Hadi. However, last week’s battles led to militia forces associated with the Emirati-backed Southern Transitional Council asserting control over large parts of the city.
The events seemed to suggest serious emerging faultlines in the Saudi-led coalition after more than four years fighting for the internationally recognised Hadi government against the Iran-aligned Houthi movement.
The Houthis control Yemen’s capital, Sana’a, and most populous areas. Hadi is based in Saudi Arabia, but his government, troops and allied parties ran Aden until the separatists, who have a rival agenda, overran government bases at the weekend.
Following the fighting the interior minister of Hadi’s government, Ahmed al-Mayssari, appeared to concede on Twitter that the UAE-backed southern secessionists had triumphed.
“We acknowledge defeat and congratulate the UAE on its victory … but this will not be our last battle,” he wrote.
The new crisis in Yemen comes as analysts have begun increasingly painting the Saudi-led intervention as an escalating “fiasco” for Saudi Arabia and Prince Mohammed bin Salman. Shops damaged during clashes between separatists and government forces in Aden. Photograph: Fawaz Salman/Reuters
Writing on the Al-Monitor website, Bruce Riedel, director of the Intelligence Project at the Brookings Institution, described the confrontation in Aden as the “latest in a long stream of strategic blunders by the Saudi leadership”.
“The victory of south Yemeni secessionists in Aden is another humiliating setback for the Saudi war effort and its commander, Crown Prince Mohammed bin Salman.
“The Saudi-backed government of Abdu Rabbu Mansour Hadi has lost its capital, further undermining its shaky claims to legitimacy. The Saudis’ closest ally, the United Arab Emirates, was partially responsible for the secessionists’ gains. The Houthis and Iran are the strategic winners.”
He added: “The Emiratis have built up the southerners for several years in Aden. When Abu Dhabi withdrew much of its own forces from the port city this summer, the secessionists were free to move against the Hadi government and rapidly prevailed. The Saudis will try to paper over the quarrel within the anti-Houthi coalition, but the damage is done to Hadi’s weak regime as well as to the Saudi-Emirati alliance.”
Since you’re here…
… we have a small favour to ask. More people are reading and supporting The Guardian’s independent, investigative journalism than ever before. And unlike many news organisations, we have chosen an approach that allows us to keep our journalism accessible to all, regardless of where they live or what they can afford. But we need your ongoing support to keep working as we do.
The Guardian will engage with the most critical issues of our time – from the escalating climate catastrophe to widespread inequality to the influence of big tech on our lives. At a time when factual information is a necessity, we believe that each of us, around the world, deserves access to accurate reporting with integrity at its heart.
Our editorial independence means we set our own agenda and voice our own opinions. Guardian journalism is free from commercial and political bias and not influenced by billionaire owners or shareholders. This means we can give a voice to those less heard, explore where others turn away, and rigorously challenge those in power.
We need your support to keep delivering quality journalism, to maintain our openness and to protect our precious independence. Every reader contribution, big or small, is so valuable.