There is no power structure in the world that can deal with issue of this scale - Armenia PM to people
Read: 408

'US is trying to settle score with China' - Russian Diplomat slams US attempt of bringing up Hong Kong at UNSC
Read: 408 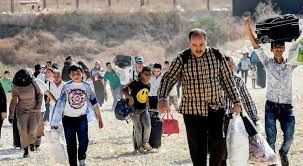 As Turkish troops finalize plans to attack northeast Syria, Ankara’s scheme to move millions of refugees into conquered territory there is alarming some Western allies as much as the military operation itself.

Addressing world leaders at the United Nations two weeks ago, President Recep Tayyip Erdogan held up a map of the region setting out ambitious proposals to build dozens of new villages and towns to settle Syrian refugees.

His map showed that 1 million Syrians would be housed in the northeast, but Erdogan told the UN General Assembly that even more - up to 2 million - refugees could settle there once Turkish soldiers take control.

For Turkey, which hosts more refugees than any other country in the world, returning some Syrians across the border has become an urgent priority as it battles economic recession and high unemployment.

But most of the 3.6 million Syrians in Turkey are Arabs from areas in western Syria, not the mainly Kurdish northeast. Moving huge numbers of refugees into an area hundreds of miles from their homes would involve a drastic demographic shift.

A senior US State Department official described the plan as “probably the craziest idea I’ve ever heard”, reported Reuters.

Reports in July of some refugees being forcibly deported from Istanbul have raised concerns about any large-scale returns. Turkey says it has not sent any Syrians back against their will.

Czech Foreign Minister Tomas Petricek, voicing widely held European concerns, said Syrian refugees should be able to return voluntarily. “I don’t think, however, that they should be returned by any military operation, Turkish or otherwise,” he said.

A European diplomat said the European Union, which has disbursed most of a 6 billion euro aid package to help Turkey host refugees on its soil, would also look skeptically at any request for funding projects inside Syria before any political settlement is reached to end its eight-year conflict.

Ankara has dismissed the concerns about the impact of a return of refugees from Turkey, saying any change to the population would only be redressing moves by the Kurdish forces which currently control the region.

“Turkey ... has no interest in occupation or changing demographics. The PKK/YPG did that in northeast Syria. Time to correct it,” Erdogan’s spokesman Ibrahim Kalin tweeted.

For Ankara, which views Kurdish People’s Protection Units (YPG) fighters in northeast Syria as terrorists because of their ties to militants waging an insurgency inside Turkey, an influx of non-Kurdish Syrians would help it secure a buffer against its main security threat.

Other areas of Syria have seen drastic population changes, with rebellious Sunni neighborhoods of Homs and Damascus emptied by the fighting. Villages in northern and western Syria have seen deals to evacuate Sunni and Shiite residents.