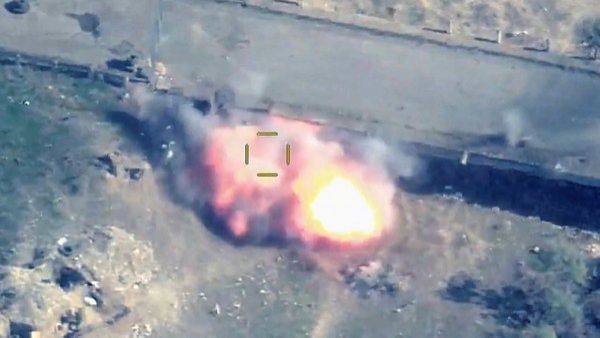 Good breaking news continues to come from Azerbaijan and the points waiting to be liberated under occupation. Azerbaijani President Ilham Aliyev announced the news on social media that made his people happy. While Azerbaijani army is on the way to the liberation of Nagorno-Karabakh, Shusha the road to the heart of Karabakh was almost surrounded. President Aliyev in his latest information also officially announced that the flag was raised on the Azerbaijan's historical Khudaferin bridge. THE ROAD TO THE HEART OF KARABAKH IN THE LAST MINUTE, "SUSHAS" IS SURROUNDED
Shusha is 14 km away from the so-capital city! Karabakh will be done if Shusha received.
The Armenian Army, which violates the cease-fires it demands, either fleeing from the positions by leaving its weapons and ammunition or attacking the civilian settlements viciously.
Continuing its advance towards the regions where PKK-backed Armenian troops were withdrawn, the Azerbaijani Army almost besieged Shusha which is just 14 km from Khankendi.
Despite the rogue state Armenia violated the second temporary ceasefire agreement once again, yesterday 13 more villages of Jabrayil were liberated by the glorious Azerbaijani army.
As the result of the Armenian violation of the second ceasefire and a treacherous attack, Azerbaijani army also decided to resume operations from where it left off.