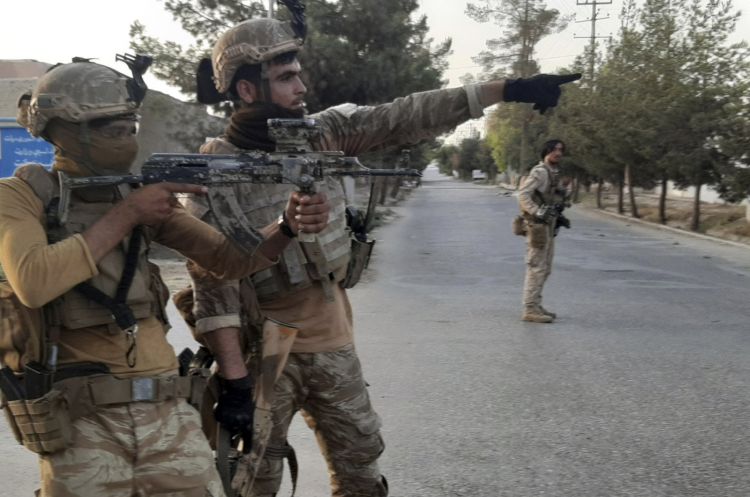 The Afghan army Thursday hit Taliban positions in southern Afghanistan with airstrikes, while the insurgent group further advanced in the country's north.
A defense ministry statement said airstrikes were carried out across the country, including in the southern Helmand province, where the provincial capital of Lashkar Gah is being fiercely contested. The Taliban control nine of the city's 10 police districts.
Residents in Lashkar Gah reported heavy bombing near the government radio and television station, which is under Taliban control. Several wedding halls and a guesthouse of the provincial governor's are all located near the radio and television station.
In northern Afghanistan, the Taliban took control of most of the provincial capital of Sar-e-Pul, the head of its council, Mohammad Noor Rahmani said. In recent months, the group has gained control of dozens of districts across several provinces in the north.
The Taliban onslaught seems to have intensified with the start of the final withdrawal of United States and NATO troops in late April. As attacks intensify, Afghan security forces and government troops have retaliated with increasing airstrikes, aided by the U.S. This has raised growing concerns about civilian casualties across the country.
“We can tell you that we are deeply concerned about the safety and protection of people in Lashkar Gah, in the south, where tens of thousands of people could be trapped by fighting,” Stephane Dujarric, the United Nations spokesperson said Wednesday.
“We, along with our humanitarian partners in Afghanistan, are assessing needs and responding in the south, as access allows,” he said.
In response to the government launching a counterattack in Lashkar Gah, the Taliban Tuesday attempted to assassinate Afghanistan's acting defense minister. A bomb-and-gun attack on Bismillah Mohammadi, who was unharmed, brought the war to the capital Kabul for the first time in months.
The next day the Taliban claimed responsibility for the attack, warning of more assaults targeting Afghan government leaders.
Meanwhile, months of on-and-off talks between the insurgents and the Afghan government in Qatar have achieved little and appear to have lost momentum as the Taliban makes battlefield gains.