Statement by Western Azerbaijani Community on the occasion of December 5 - Deportation Day
Read: 137 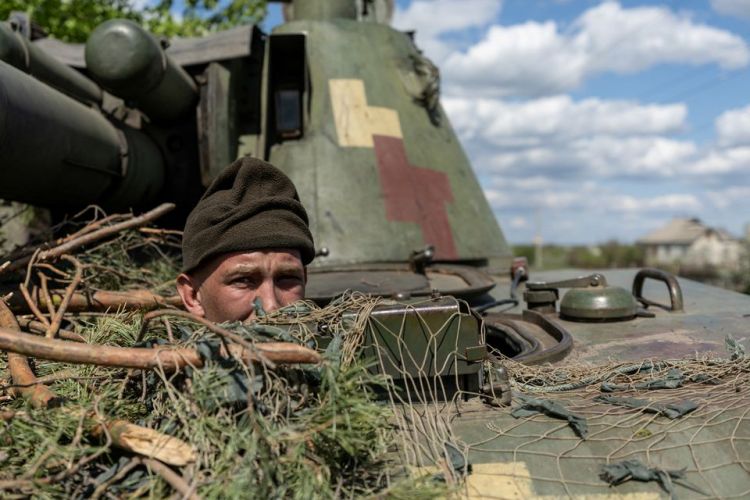 Russia said on Saturday its troops had abandoned the key bastion of Lyman in occupied eastern Ukraine, a stinging defeat that prompted a close ally of President Vladimir Putin to call for the possible use of low-grade nuclear weapons.
The announcement came just a day after Putin proclaimed the annexation of four Ukrainian regions - including Donetsk, where the city of Lyman is located - and placed them under Russia's nuclear umbrella, at a ceremony that was condemned by Kyiv and the West as an illegitimate farce.
"In connection with the creation of a threat of encirclement, allied troops were withdrawn from the settlement of Krasny Liman to more advantageous lines," Russia's defence ministry said, using the Russian name of the town.
President Volodymyr Zelenskiy later said in a video address that although the Ukrainian flag was flying in the city, "fighting is still going on there".
He also indicated Ukrainian troops had taken the village of Torske, on the main road out of Lyman to the east.
The Russian statement ended hours of official silence after Ukraine first said it had surrounded thousands of Russian troops in the area and then that its forces were inside the city.
Ukraine's defence ministry wrote on Twitter that "almost all" the Russian troops in Lyman had either been captured or killed.
Russia has used Lyman as a logistics and transport hub for its operations in the north of the Donetsk region. Its capture would be Ukraine's biggest battlefield gain since a lightning counteroffensive in the northeastern Kharkiv region last month.
Zelenskiy said that in the days to come, Ukrainian forces would liberate more towns.
The recent Ukrainian successes have infuriated Putin allies such as Ramzan Kadyrov, the leader of Russia's southern Chechnya region, who said he felt compelled to speak out.
"In my personal opinion, more drastic measures should be taken, right up to the declaration of martial law in the border areas and the use of low-yield nuclear weapons," Kadyrov wrote on Telegram before Zelenskiy spoke.
Other top Putin allies, including former president Dmitry Medvedev, have suggested Russia may need to resort to nuclear weapons, but Kadyrov's call was the most urgent and explicit.
Putin said last week that he was not bluffing when he said he was prepared to defend Russia's "territorial integrity" with all available means, and on Friday made clear this extended to the new regions claimed by Moscow.
Washington says it would respond decisively to any use of nuclear weapons and has spelled out to Moscow the "catastrophic consequences" it would face.
'ALREADY IN LYMAN'
The Russian defence ministry's statement made no mention of its troops being encircled at Lyman.
"The Russian grouping in the area of Lyman is surrounded," Serhii Cherevatyi, spokesperson for Ukraine's eastern forces, said hours earlier.
He said Russia had 5,000 to 5,500 troops at Lyman but the number encircled could be lower. He later confirmed Ukrainian troops were inside the town.
Two Ukrainian soldiers taped the yellow-and-blue national flag to the "Lyman" welcome sign at an entrance to the city, a video posted by the president's chief of staff showed.
"Oct. 1. We're unfurling our state flag and establishing it on our land. Lyman will be Ukraine," one of the soldiers said.
Neither side's battlefield assertions could be independently verified.