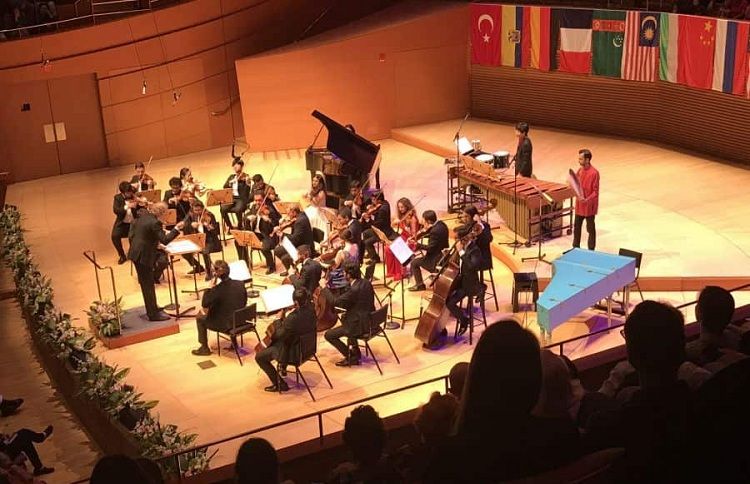 iPalpiti is an eccentric spelling of the Italian word for heartbeats. And indeed the name fits the irresistibly energetic music, uniquely played by an orchestra of young musicians, to the baton of Maestro conductor Eduard Schmieder.

iPalpiti is the vision, come to fruition, of Eduard and Laura Schmieder. After years of friendship, conversations about the future of classical music and collaboration and thereafter receiving the blessing and support of the late Lord Yehudi Menuhin – American-born violinist and conductor who spent most of his performing career in Britain – Young Artists International was born in 1997, to become iPalpiti Artists International in 2008.

Conductor Schmieder, a noted violin pedagogue, born and trained in Russia, came to the United States with his wife, Laura, in 1979. Both are self-described refusenik Jews – from the word refuse – who lived in the then-Soviet Union and were refused permission to leave and emigrate out of Communist Russia.

Though “iPalpiti” appears to be a hi-tech product’s name, this international artist platform is home to young international music laureates.

From its inception, iPalpiti’s mission has been to discover and support post-conservatory musicians, whose talents were destined to make them the leading classical musicians of their generation. Over the years iPalpiti has created an international network of classical artists, bypassing the conflicts of our time and forging life-time friendship and associations, paving a path to global coexistence through the music.

On Saturday, July 20, 2019, at the Walt Disney Concert Hall, by the invitation of the Consulate General of Azerbaijan, I attended iPalpiti 2019 grand finale concert. Among the orchestra members was Azerbaijani violinist Azer Damirov. The orchestra played ‘Harmony,’ a world premiere commission of a new composition by the renowned Azerbaijani composer Franghiz Ali-Zadeh, at the piano who was this year’s festival Composer-in-Residence.

Azer Damirov, a violinist, and member of iPalpiti since 2009 is the Azerbaijani nation’s musical protégé pride. He began his musical studies at the age of eight. At 14, he was accepted in the Musical College of the Tchaikovsky Moscow State Conservatory in the class of Professor Maria Keselman and in 2007, at the age of 20, he graduated with an equivalent of a Bachelor Degree Diploma.

Among Azer’s latest achievements, is the winner of the American Protégé International Competition of romantic Music, a 2012 performance at the Weill Recital Hall at Carnegie Hall, New York City. In 2018, accepting a special invitation from the Ministry of Culture of Azerbaijan, he gave a solo recital and a master class in Baku, Azerbaijan’s capital. In 2019, as the winner of the Beverly Hills National Auditions, he and violinist Adelya Shagidullina, a fellow iPalpitian, gave a series of concerts in Southern California.

Professor Franghiz Ali-Zadeh, born in1947, is one of the leading composers of our time and is highly regarded for her creativity and distinctive musical style. She serves as the Chair of the Composers’ Union of Azerbaijan and as a juror on the International Composers Competitions. Her works include commissions and performances by Yo-Yo Ma, Hillary Hahn, Kronos Quartet and the Berlin and The Royal Concertgebouw orchestras to name a few.

Professor Ali-Zadeh’s compositions draw their characteristics from modern European classical music and incorporate the sounds of mugham music traditional to Azerbaijan. (Mugham is one of the many folk musical compositions from Azerbaijan.) Her distinctive and upbeat ‘Harmony’ composition certainly contributes to the musical culture of iPalpiti, which is to create musical bridges and a dialogue between cultures to promote the exchange and mutual enrichment of the spiritual treasure of East and West.

With her works’ catalogue that includes solo, chamber, ensemble, and orchestral music, performed with enthusiasm on prestigious stages around the world, Ali-Zadeh uniquely succeeds in blending the musical traditions of her homeland, Azerbaijan, with modern western compositional techniques.

Azerbaijan, located in the South Caucasus region, not only has ancient music traditions, it is also the world’s birthplace of the first opera (1908), operetta (1910), and ballet (1940).

Being harmonious interfaith and mutual acceptance and respect center for Muslims, Jews, Christians, Baha’is and others, the Republic of Azerbaijan’s society is a model for humane coexistence.

In iPalpiti – the Pulse of Music – 2019 Festival booklet, Mr. Nasimi Aghayev, the Consul General and the Republic of Azerbaijan tribute said: “I would like to express my sincere gratitude to Maestro Eduard Schmieder, the founder of the iPalpiti Chamber Orchestra, and Mrs. Laura Schmieder, the Director of the iPalpiti Artist International, for their tireless efforts in promoting peace and understanding though music.”

Music binds the world together. While at the concert hall, I was surrounded by people who spoke many different languages, and together they yelled ‘bravo,’ expressing their mutual salute to the awesome performance of the iPalpiti orchestra.

On the iPalpiti website one reads: “Dedicated to the artistic career advancement of exceptionally gifted young professional musicians and to the promotion of peace and understanding through music.” How apropos this statement is to Azerbaijan, a country that excels in global coexistence and mankind harmony.