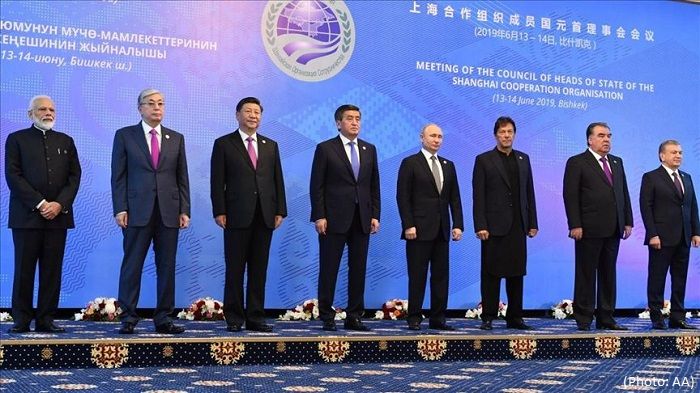 The plenary session of the 19th summit of Shanghai Cooperation Organization (SCO) started in Kyrgyzstan capital, Bishkek on Friday.

Indian and Pakistani premiers, who were face-to-face first time at the forum since assuming office, highlighted issues of their concern.

Indian media reported that, even though both Modi and Khan sat across the table at a dinner at the Frunze restaurant on Thursday night, they did not exchange pleasantries.

Khan suggested that the SCO, which represents 42% of the world’s population and 20% of global GDP, should take steps to trade in local currencies rather in dollars. He also asked for setting up financial institutions including an SCO bank.

Earlier leaders of member countries -- China, Russia, Pakistan, India, Tajikistan, Uzbekistan and Kazakhstan -- arrived at the Ala-Archa Congress Hall in Bishkek, the venue of the summit, where they were received by Kyrgyzstan President Sooronbai Jeenbekov.

Turkey is participating in the summit as a dialogue partner – that envisages countries to cooperate with the grouping to promote regional security, fight against terrorism, drug trafficking and steps to prevent organized crimes.

In his inaugural address Krygyztan President, emphasized need to deepen cooperation and develop connectivity in the region. His stress on connectivity is seen as broad support to the China’s Belt and Road Initiative -- a global development strategy adopted by Beijing involving infrastructure development and investments across the regions.

In his eight-point presentation, Khan said there was a need to galvanize the Shanghai spirit to mitigate risks of conflict and to promote stability in the region. He also proposed creating a cultural and tourism corridor running through all the eight countries.

“We should synergize the regional-connectivity through digital, cultural, touristic and academic ways,” he said. He further asked member states to take lead in combating corruption.

PM Modi said there was need to act against countries, who are sponsoring, aiding and funding terrorism. Underscoring the aim of the SCO to strengthen cooperation in the fight against terrorism, he called for organizing a global conference to combat it.

“Countries will have to come out of their narrow purview to unite against terrorism to fight it,” he said in the presence of Imran Khan.

The leaders, who arrived Bishkek on Thursday held extensive bilateral meetings on the sidelines of the summit. Chinese President Xi Jinping held meetings with both Indian and Pakistan premiers. During his meeting with Chinese leader, Modi reiterated India's stand that talks with Pakistan can resume only after the country takes concrete action against terror. "Pakistan needs to create an atmosphere free of terror, but at this stage we do not see it happening. We expect Islamabad to take concrete action" to resume talks, Indian Foreign Secretary Vijay Gokhale quoted the Prime Minister as telling President Xi.

Ahead of the summit, Pakistan Prime Minister and Foreign Minister Shah Mehmood Qureshi had written separate letters to their Indian counterparts, pushing for resumption of bilateral talks.

But no bilateral interaction has been scheduled between PM Modi and Imran Khan.