Azerbaijan has right to use its armed forces to take back its legally acknowledged territory - British journalist
Read: 2602

In 2018, Russia and Japan were closest to signing peace treaty
Read: 265 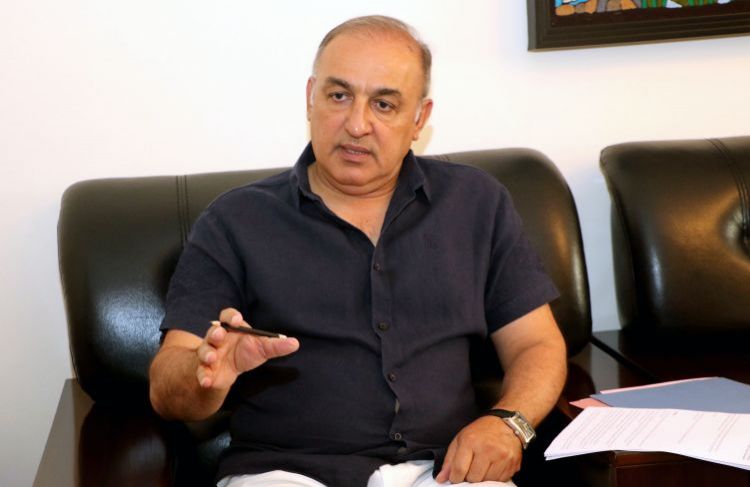 Indian government under Narendra Modi, the leader of Bharatiya Janata Party (BJP) abolished the special status of Kashmir by abrogating Article 370 and 35A  on August 5. After this decision, the Indian government locked down Kashmir mostly populated by Muslims and deployed troops on the region. The occasion has fueled the long-standing Pakistan-India conflict. Ambassador of Pakistan to Azerbaijan Saeed Khan Mohmand told to Eurasia Diary in an exclusive interview regarding the events.

- Mr. Ambassador, what are the reasons standing behind India's abolition of Kashmir's high autonomy status? What is India's intention?

- I want to tell you a brief history of the conflict so that you can better understand the Kashmiri problem. According to the Partition principle adopted in 1947, colonial India divided into two states Muslim-majority areas as Pakistan and Hindu-majority areas as India. There are many provinces in India and the majority are Hindus. But in Kashmir, the majority of the population is Muslim, but the power belongs to the Indians. I would like to bring to your attention that the first Prime Minister of India, Jawaharlal Nehru was a Kashmiri Indian. He made the Kashmiri Maharaja (ruler) sign Partition principle in favor of India in 1947. According to this mechanism, Kashmir should be linked to India in finance, defense, communications and foreign affairs. By signing this, during the period of time India deployed troops to Kashmir and occupied it. In 1947, 45% of the territory belonged to India, 35% to Pakistan and 20% of Kashmir called Ladakh to China. However, 70% of the Kashmiri population were Muslims. Article 370 and Article 35A came into force in 1949. This law gave the Kashmir region an independent flag and parliament. According to the law, non-Kashmiris cannot buy property in Kashmir. If a Muslim woman in Kashmir marries a non-Kashmiri, her property rights will be lost. People living outside Kashmir cannot participate in Kashmiri elections. No one out of Kashmir is allowed to work here. Kashmiri Freedom Movement has also begun in the last past 70 years.

It should be noted that the Security Council of the United Nations (UNSC) adopted 11 resolutions on the settlement of the Kashmir conflict. Each of these involves the determination of Kashmir's status by transparent and free elections. But India does not agree. India currently holds 600,000 troops in the region, which is considered the most armed zone in the world. More than 180,000 troops have been deployed in recent days.

The move of the abrogation of Article 370 has several factors. The idea of ​​abolishing the article was also mentioned on the election platform of BJP. This party with extremist and racist views supports the idea of ​​"India for Hindus". In addition, after the abolition of this article, India will have the opportunity for demographic change in the region and will seek to increase the Indian population. The first factor is the idea that India belongs to the Hindus, and the second factor is the demographic change and the last factor is the peace talks in Afghanistan. India is not involved in the peace process in Afghanistan, but Pakistan is a direct participant. With the abolition of this article, they want to block Pakistan in these processes. By joining Kashmir to India, India could make problems for Pakistan on the western front of Afghanistan. Because peace in Afghanistan will work in favor of Pakistan, this region has geostrategic importance to Pakistan.

- Following India's decision, Pakistani Prime Minister Imran Khan seeks a diplomatic solution to the conflict. But India is not going to take a step back. Can India's uncompromising position drive Pakistan into war?

In his first speech, Prime Minister Imran Khan said that if India took a positive step towards the settlement of Kashmir, we would take ten steps. This long-standing conflict should be resolved within 11 UN Security Council resolutions. India, however, ignores these resolutions and increases its military presence in the area. At present, there is one soldier per ten people. Most people in Kashmir, including Christians, want freedom for Kashmir. Because the nationalist ideology of India will also cause the destruction of their churches. The governments of many countries - Britain, Saudi Arabia and the United States - have called on the parties to follow UN resolutions. Azerbaijan is a representative of the special group on the Organization of Islamic Cooperation on the Kashmir conflict. Azerbaijan's reaction is also important.

India and Pakistan, both countries have nuclear weapons. This conflict threatens not only the region but also the entire world. Pakistan does not want war, it simply wants to implement the decisions that have been made. It is the most miserable conflict that threatens international peace. 110,000 Kashmiris have been killed in the last 30 years. This demonstrates India's desire to commit genocide to the Kashmiri Muslims. I want to say that India was the first country to raise this issue at the UN Security Council in 1947. At that time the presence of the Indian army in Kashmir was weak. India won time by bringing the UN to the issue, then India began to deploy its troops to the conflict zone.

Pakistan has always supported the people of Jammu and Kashmir. We have provided them with diplomatic, political and moral support. India has been blocking Kashmir for the past 10-15 days and committing human rights abuses. For example, many of the family's sons have been taken away and no one is aware of their fate.

Narendra Modi's policy reminds us of Hitler's policy. This is a racist and extremist position. Pakistan wants to bring the case to the International Court of Justice. Because how long can the current situation last?

- In July, US President Donald Trump met with Imran Khan in Washington and said he was ready to mediate the Kashmir issue. However, less than a month after the meeting, India abolished Kashmir status. Could India's decision be interpreted as excluding the United States from the Kashmir problem? But will the US support Pakistan after this decision?

- Trump said during the meeting that Modi had suggested him to be a mediator on the Kashmir issue. However, Modi later denied this. The White House said that Modi had made such a proposal. Pakistan welcomes the involvement of UN Security Council permanent members in the conflict.

Pakistan and India are among the world's largest armies, but both countries have nuclear weapons. Any conflict can have catastrophic consequences. 40% of the world is located in South Asia. China, India and Pakistan, each of the three neighboring countries, are a nuclear country. In 1962 there was an armed conflict between China and India. This conflict is not just between two but three countries. Do you know how tragic it can be? In India, the ruling party has a racist position and sowed it in society. But India should be a secular state. Modi wants India to be for the Indians, but there are millions of Muslims, Christians and Buddhists here.

Many Kashmiri leaders have been arrested after the incident. None knows what happened to them. I would like to point out that Kashmiri leaders are Muslims because the majority of the population belongs to this religion.

- Kashmir is not the only problem of Pakistan but also the entire Muslim world, like Karabakh, Eastern Turkestan and Northern Cyprus. What are Pakistan's expectations from other Muslim countries, particularly Azerbaijan, in the context of the Kashmir issue?

Unfortunately, many Muslim countries have economic interests with India. When these interests come to the fore, the Kashmiri problem stays behind. This is a shame to the Muslim world because they need to limit their relationship with India for this issue and cancel the trade.

11,000 Muslim Kashmiri women have been raped and 110,000 have been killed. This should be perceived not only as a problem of Pakistan but of the entire Muslim world.

Muslims are considered as an Ummah, that should be unity. In this case, their support is important. Pakistan has always supported Muslim countries in the current problems, such as Karabakh, Bosnia, Syria and so on.

- What can you say about the current relations between Azerbaijan and Pakistan and the perspectives for cooperation?

- Pakistan has always had a positive relationship with Azerbaijan and we appreciate it very well. Pakistan has always supported Azerbaijan in the Karabakh conflict. Pakistan recognizes Khojaly tragedy as genocide and is the only state that does not recognize Armenia as an independent state. Pakistani Parliament adopted a resolution requiring the withdrawal of Armenian armed forces from Karabakh.

Considering all of this, we consider Azerbaijan's help in Kashmir important. Azerbaijani government should do something. As I mentioned, Azerbaijan is a member of the OIC group on Kashmir and its reaction is important.

Pakistan has always regarded Azerbaijan as its brother country. We really appreciate these connections. We have a lot of common values. There are thousands of common words in our vocabulary, and there are many similarities in our habits. Every day I meet a lot of Pakistani people who want to set up business in Azerbaijan. Azerbaijan provided financial assistance to Pakistan and Azerbaijan helped during the 2005 earthquake in Pakistan. We can add many events to this list.

Pakistan and Azerbaijan have close military cooperation. Pakistan ready to sell JF-17 military fighters to Azerbaijan If I'm not mistaken, Armenia will buy fighter jets from Russia, and if Azerbaijan accepts Pakistan's proposal, it will maintain its dominance in the airspace.

At the end of the meeting, Mr. Ambassador expressed his satisfaction with his work in Azerbaijan and said he had never felt in a foreign country. He expressed his gratitude for the kindness of the people here and said that the embassy is always open to Azerbaijani press. 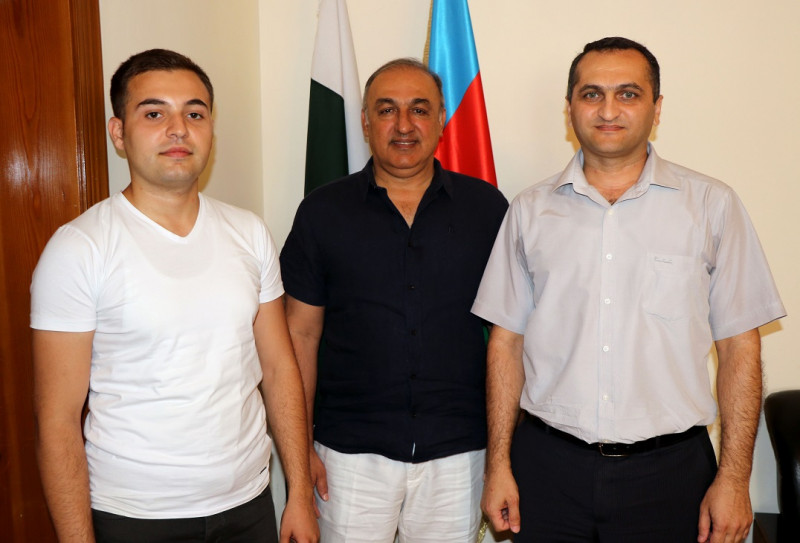