Baghdad conference - Is France trying to restore its geostrategic power in the Middle East? 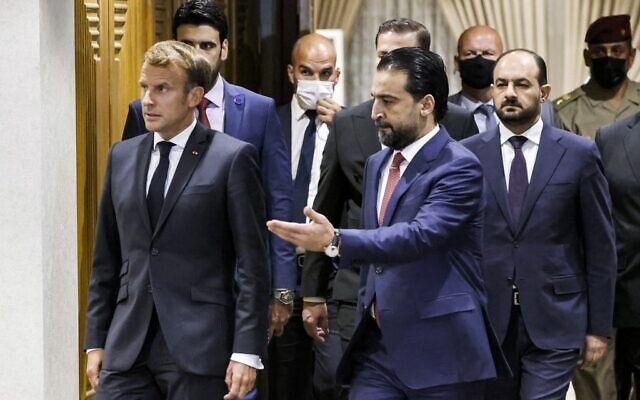 On 28 August, the international conference in Baghdad for Cooperation and Partnership with neighbouring countries, co-organized by Iraq and France, hosted by Iraqi Prime Minister Mustafa Al-Kadhimi and French President Emmanuel Macron, and attended by leaders and high representatives of the United Arab Emirates, Qatar, Kuwait, Saudi Arabia, Jordan and Iran.

In the conference Iraqi Prime Minister Mustafa al-Kadhimi, French President Emmanuel Macron and leaders of the Arab world discussed the regional crises, especially in Lebanon and Yemen, and fight against all elements of terrorism and religious fundamentalism in the Middle East.

- How is it true to consider that the co-organization of the Baghdad conference is the main aim of the Macron government to set out the restoration of France’s geostrategic power in the Middle East?

- Most recently held Baghdad Conference for Cooperation  and Partnership vividly reflected regional countries especially the host Iraq to seek more and more assistance from the world power brokers for the socioeconomic development of its people. That is why while addressing the conference Prime Minister of Iraq termed it step towards greater cooperation and integration.
On the other hand  French President Emmanuel Macron, addressed  the conference and said the holding of the convention affirms the notion that cooperation and partnership are the basis for achieving regional peace.
The French president affirmed that the convention prime goal is aiding Iraq in its bids to bolster stability, combat terrorism, reiterating Paris' backing for the better ties in Middle East.
French adopted this approach  to make dialogue the dominant tool for communication, affirming that it is also aimed at basing the ties among the stakeholders on partnerships and mutual respect.
Macron described  it a historic event that will enhance stability in Iraq and the region.
He stressed that his country was keen on the stability of Iraq, on which its participation in the war against terrorism, reiterating France's commitment to the alliance with Iraq in this field.
He pointed out that France through its companies operating in Iraq is contributing to the reconstruction of Iraq, including the Mosul airport project and construction projects in Anbar and other regional countries.
It seems that rigorous participation of France in this conference will definitely further enhance its role and geo/strategic interests in Iraq and rest of the region because there is an realisation among the policy makers of France that it should try to restore its lost connection of Middle East and especially in Iraq to safe guard its socioeconomic, geopolitical and geo-geo-strategic interests. That is why French president promised to assist Iraq to rebuild its broken infrastructure.
- What are geostrategic interests of France in Iraq and Lebanon?
- Simply France desires to gain some kind of comparative advantage in diverse fields of economy, politics, engagement, connectivity and FDI etc in Iraq and Lebanon.
In the near past out of its trans-regional vested interests France supported restoration of sovereignty in Iraq and Lebanon through different ways and means of economic, commercial diplomacy by the Franco-Lebanese relationship, the declaration of Greater Lebanon in 1920. Moreover extend support for victims of the Beirut explosion and rapid reconstruction of the port, reform of the electricity sector, control of capital flux, judicial and financial governance, fight against corruption and smuggling, reform of public procurement". Swapping of oil with medicines and necessities of life is the push forward aim of French President. Interesting France also wants to create some kind of geopolitical and geo-strategic balance in the Middle East through assisting Sunni States against dominating role of Shias in the region and beyond.
- How do you think, could France play an important role in the elimination of all menaces of terrorism and reinforcement of the long-term security in Iraq?
- France is grieving hard to eradicate elements of Terrorism and fanaticism in its own country that is why it has changed its out reach policy which connected it to greater Middle East region to seek some kind of diplomatic support against its so called structural reforms, societal and administrative reforms against Muslim community living in France.
Policy makers and politicians of France think that roots of global Terrorism should be rooted out to make this world a safer place to live in. Due to which it is even ready support Iraq and Lebanon governments against their struggle and strive of combating terrorism, radicalisation and fanaticism. But I personally think it would a easy ride to France to achieve this goal.
- If we look at history of Iraq, Baghdad has stronger historical and political ties with Turkey, Iran, as well as Britian/US alliance? However, in these cases, Baghdad is trying to approach France and invites Paris take part in the geopolitical developments in Iraq. What are main reasons of that?
- History of Iraq has been  interesting but complex and complicated reflection of proxies and foreign domination. But now due to rapidly geopolitical and geo-strategic compulsions, comprises and conspiracy theories there is a space and cushion of France to fill the gap being a powerful global power broker. Being prominent regional expert France may apply diversified but innovative channels of diplomacy to win hearts and souls of regional people especially Iraq and Lebanon to just safe guard it’s own vested interests.
- How is it true to think about that the Macron government and Arab leaders to be unified under the umbrella to promote the durable resistance against the religious fundamentalism?
- Rising incidents of Terrorism in French society is a wake call for its policy makers and politicians too. It has already initiated numerous policies and programs to achieve ideal levels of stability in the country. French president past statements about declining Islam and hatred towards Muslim have already  spread spirits of divide and distrust at regional as well as international level, especially Turkey strongly condemned and rejected French misperception of Islam and Muslim world.
Thus French re-apporachment towards Iraq and Lebanon will not be easy to transit and translate and it will take some time to surface. Having said its efforts to create some kind of geopolitical and geo-strategic balance between Sunni and Shia states may get some meaningful dividends in the days to come
by Yunis Abdullayev