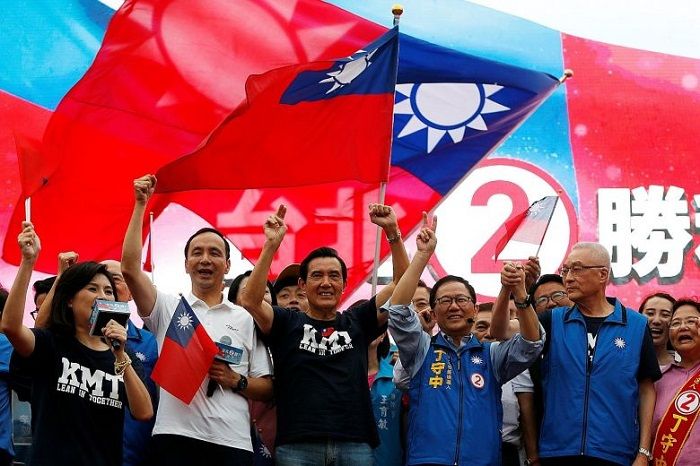 Taiwan’s presidential race kicked off Monday with China the top issue as a Beijing-friendly mayor won the chief opposition party’s primary to face an incumbent who wants Beijing to keep a distance, reports VOA.

The opposition Nationalists announced that Han Kuo-yu, now mayor of the Taiwanese port city Kaohsiung, had won the presidential primary Monday against four other candidates, including the founder of consumer electronics assembler Foxconn Technology. Han will go up against incumbent Tsai Ing-wen in the January 2020 general election.

China is expected to define the late-year campaign because the two contenders differ on how to handle it, reflecting divisions among Taiwanese people.

Taiwan and China have been separately ruled since the Chinese civil war of the 1940s, but Beijing still claims sovereignty over the island. Opinion surveys as recent as January show most Taiwanese oppose rule by China, and protests in Hong Kong since June against the territory’s own rule by Beijing have solidified that sentiment.

But many Taiwanese say they hope their government can keep peaceful economic ties with China while holding it off politically. They complain of low salaries and high housing costs at home. Some see China in turn as a source of investment or as a place to find work.

“The Hong Kong matter will make people feel on guard, but when they vote for a president, they’ll hope to change their own lives, and voting will take that direction,” said Ku Chung-hua, standing board member with the Taiwan advocacy group Citizens’ Congress Watch.

Han, 62, has vowed to make peace with China. In March he signed deals with four Chinese cities including Hong Kong to sell $167 million worth of Taiwanese agricultural products. He won the mayoral race in November partly on an economic improvement platform.

In April, Han visited the United States to meet members of Congress and encourage American investment in Kaohsiung. The former 10-year Nationalist Party lawmaker had once managed a company that markets Taiwanese agricultural goods.

“Han Kuo-yu is the only candidate who has a really strong appeal to the lower middle class,” said Joanna Lei, CEO of the Taiwan-based Chunghua 21st Century Think Tank, comparing him to other Nationalist Party figures. He won the primary after party-commissioned public opinion polls returned a 45% support rate.

Tsai, elected in 2016, supports economic ties with China but disputes China’s condition for dialogue — that the two sides fall under one flag — meaning the two sides never talk. China has grown increasingly impatient with Tsai over her term, using military aircraft flybys and diplomatic pressure abroad as warnings.

After Chinese President Xi Jinping advocated earlier in January that China rule Taiwan under a “one country, two systems” setup as it governs Hong Kong, Tsai grew more vocal against the political pressure from China. The Hong Kong protests have added weight to her cause.

Race too early to call

Tsai’s ruling Democratic Progressive Party lost most mayoral and county magistrate seats in the November local elections that put Han into power. Voters had called Tsai’s management of the economy slow or ineffective. Now GDP growth is expected to slow slightly this year to 2.2%.

But approval poll ratings for the president rose more than 10 percentage points in the months after she ramped up her anti-China comments.

The presidential race is too close to call, Huang Kwei-bo, vice dean of the international affairs college at National Chengchi University in Taipei.

“You can’t say, because the Nationalists now, according to polls, don’t have a candidate who could definitely win,” Huang said. “Changes in Taiwan’s elections happen fast.”