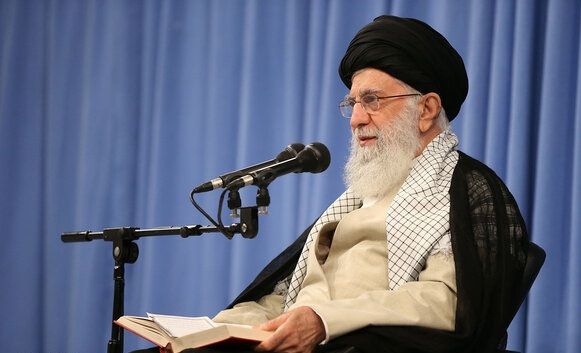 Leader of the Islamic Revolution Ayatollah Ali Khamenei highlighted that there will be no talks between Iranian and American officials "neither in New York nor anywhere else," Mehr News reports.

Making the remarks during his teachings in a class of advanced Islamic Jurisprudence (kharej–e Fiqh) on Tuesday, Ayatollah Khamanei touched upon US ‘maximum pressure’ policy against Iran.

Referring to different stances of US officials regarding talks with Iran, Ayatollah Khamanei said “Sometimes they call for negotiations with no preconditions and other times they talk of negotiations under 12 conditions. These contradictory remarks are either a sign of their confused policies or is a trick to confuse the other side. Of course the Islamic Republic will not be confused since our path is clear and we are aware of what we do.”

US’s aim for negotiations is not to find a fair solution but to impose its ‘insolent demands’ on Iran, he said.

“US aims to prove to all that maximum pressure has worked and that officials of the Islamic Republic were forced to come to the negotiating table despite previously saying ‘we won’t negotiate’. [And] so [to prove that] the only way to face Iran is through maximum pressure.”

“If America takes back its words and repents and returns to the nuclear deal, which they have violated, they can take part in the meetings of signatories to this agreement with Iran. Otherwise, no negotiation on any level will happen between officials of the Islamic Republic and America, neither in New York nor anywhere else,” said Ayatollah Khamenei said, in reference to foreign media speculations of a possible meeting between President Rouhani and Trump on the sidelines of the upcoming UNGA meeting in New York.

“If the enemy could prove the effectiveness of maximum pressure on Iran, then Iran and our beloved nation will no longer experience comfort, because this will be put behind all America's arrogant policies. And from then on, in response to their bullying demands from the Islamic Republic, if we say ‘yes’ the issue will be closed, but if we say 'no' the maximum pressure would start again.”