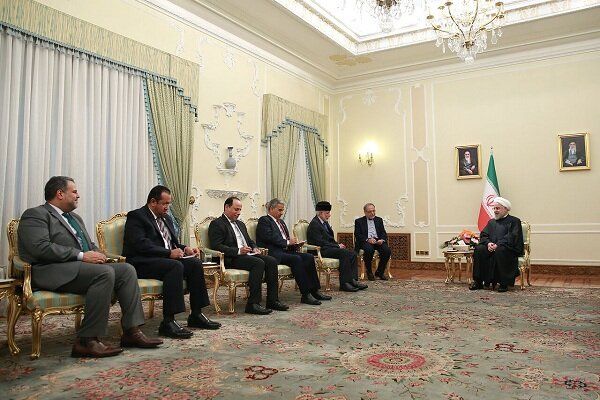 Iranian President Hassan Rouhani said that Iran has no problem with developing relations with neighboring countries and renewing relations with Saudi Arabia, and all countries must be together in order to provide security and stability in the region, Eurasia Diary reports citing Mehr News.

He made the remarks in his meeting with Omani Foreign Minister Yusuf bin Alawi on Tuesday.

Stating that meeting with Omani officials is always a great opportunity to develop friendly relations, he said, “Iran attaches great importance to the development of relations and cooperation with its neighbors, particularly Oman.”

Iranian President noted, “Fortunately there has been good momentum in economic relations between Iran and Oman”, adding, “We hope that good steps will be taken to develop and strengthen Tehran-Muscat relations and cooperation by holding the 18th Joint Commission on Cooperation between the two countries.”

Pointing to the necessity of further development of Oman-Iran relations in various fields, including scientific and cultural, people-to-people relations, shipping and tourism, he said, “The two countries' economic activists and investors can develop partnerships using their capacities and capabilities.”

Iranian President said that the Yemen crisis is one of the major problems in the region, adding, “The [Saudi-waged] Yemeni war has achieved nothing but destruction, killing people, creating hatred between the two countries and threatening the territorial integrity of Yemen.”

“Unfortunately, Europe and the US, despite their apparent comments, are not interested in making peace in Yemen because they have been able to sell a great deal of weapons,” he continued.

Emphasizing there is no other way than brotherhood and friendship between nations and countries in the region, Rouhani said, “We should all strive to end the war in Yemen as soon as possible and bring stability and security to this country in the framework of Yemen peace talks.”

President Rouhani also expressed hope that Iran's and Oman's peace efforts will lead to peace, stability and security in the region and the development of friendship and brotherhood among nations.

He said, “We believe that we should work together to solve the region's problems”, adding, “The policies of the Saudi government in Syria, Iraq and Lebanon have made no progress to them, and we hope that the Saudi authorities will change their policy.”

Pointing to Islamic Republic of Iran’s view of developing relations with its neighbors and renewing ties with Saudi Arabia, Iranian president said, “We believe that all regional countries must stand together in order to provide security and stability in the region.”