An artillery attack on a second US military convoy in Syria
Read: 947

Team of specialists from Russian armed forces arrives in Armenia to assist in struggle against COVID 19
Read: 559 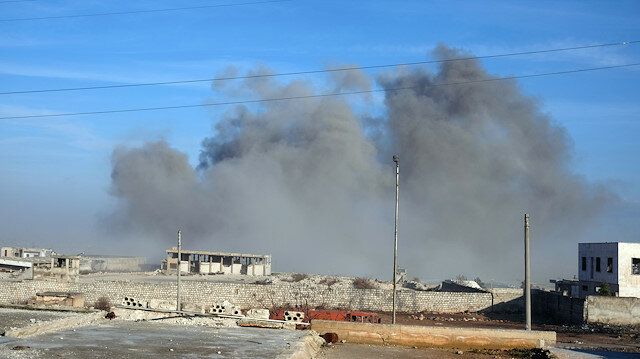 The Syrian province has been the scene of an ongoing offensive that has displaced nearly 900,000 civilians since December.

In a press conference on Capitol Hill, Nihad Awad, executive director of the Council of American-Islamic Relations (CAIR), said the largest humanitarian catastrophe in the 21st Century has been "unfolding before our eyes" for the past few months.

"We are here to call on the Trump administration to make Syria a priority, to apply the necessary pressure on the Syrian regime, Russia and its allies to end the bombing of the Syrian population," said Awad.

He said the press conference aimed to call attention to the plight of Syrians and the lack of action to what is happening in Syria.

Zaher Sahloul, president of the humanitarian charity MedGlobal, said Trump could salvage the credibility of the U.S. and "prove that you have an upper hand by making Syria a priority."

Sahloul said the U.S. president must force his Russian counterpart Vladimir Putin to stop the bombing of Syrian hospitals and children.

"Russia was given a free hand in Syria, and it created chaos," he said.

During the press conference, the UN and its Secretary-General Antonio Guterres were urged to visit Syrian people in Idlib and take concrete action to protect the population there.

"You need to go to Idlib right now, like you did when you traveled to the Bahamas and other disaster regions. You need to hold a press conference with the Syrian children. You can choose any of the 1,250 camps that host 1.5 million displaced civilians," said Sahloul.

The head of CAIR, an advocacy and civil rights group, said Washington should pressure Moscow to end the crisis in Syria and to provide humanitarian aid to Syrian refugees.

Zaki Lababidi, president of the Syrian American Council, called for international help for Turkey and its leader President Recep Tayyip Erdogan, who he said was working to protect civilians in Idlib.

"But they need NATO help and [they are] facing Russian aggression and we should provide that [help]," said Lababidi.

In his remarks, Lababidi said former President Barack Obama’s administration and the Trump administration "missed an opportunity" in the past years and hundreds of thousands of people were killed at the hands of the regime and its allies.

"Let's not miss another opportunity. This is a historic moment. We will finally stop these evil killings or hundreds of thousands more people will lose their lives," he said.

Ford said approximately 2 million Syrians were crammed into a small space in Idlib, the Syrian army is beginning to shell camps and Russian forces have been bombing hospitals.

"There is nowhere left for them to go," he said.

"What I would like all Americans to know is that this is not just another problem in Syria. The scale is much greater than anything the world has seen in recent decades.”

In September 2018, Turkey and Russia agreed to turn Idlib province into a de-escalation zone in which acts of aggression are expressly prohibited.

Since then, however, more than 1,800 civilians have been killed in attacks by regime and Russian forces, flouting the 2018 ceasefire and a new one that started on Jan. 12.

The Syrian regime's advances have sent hundreds of thousands of civilians fleeing toward the border with Turkey, which already hosts more than 3.7 million refugees.