Every Armenian resident of Karabakh will have to take a written oath of allegiance to Azerbaijan - Expert
Read: 622

"Agdam operation was already part of plan, we would have liberated Agdam, anyway" - Azerbaijani President
Read: 299

Leaders of religious confessions in Azerbaijan issued a joint statement on the destruction of our religious monuments in Karabakh.
Read: 269

Shusha and Lacin: - The two towns shaping the Armenia-Azerbaijani conflict 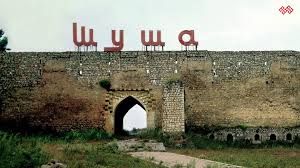 The war between Armenia and Azerbaijan will be determined by the fate of the two strategic towns, Eurasia Diary reports citing TRT News.

Earlier this year the Armenian occupied region of Karabakh held “presidential elections” which saw Arayik Harutyunyan being elected with more than 88 percent of the vote.

The region, renamed Artsakh by the Armenians, is not recognised by any other country, including Armenia as a separate entity. Consecutive UN resolutions have made it clear that the region is part Azerbaijan.

That didn’t stop Harutyunyan from declaring himself president and holding his controversial inauguration in the town of Shusha, angering Azerbaijan in the process.

Fast forward to October 2020, the Azerbaijani army is on the outskirts of the town of Shusha as part of its ongoing effort to liberate areas from Armenian backed separatists.

The region has significant strategic and cultural importance for Azerbaijan. It's the birthplace of many Azerbaijani writers, social figures and politicians and were it captured, it would be a significant milestone in the ongoing one-month-old conflict.

“Shusha is indispensable for Azerbaijan's counter-offensive campaign,” says Rauf Mammadov, a scholar at the Middle East Institute in Washington.

“It is essential for both military and political reasons. By regaining major mountainous towns, Azerbaijan will ease its way towards Lachin and Kalbajar, two remaining districts with challenging terrain,” added Mammadov speaking to TRT World.

In recent days the Azerbaijani army has also made inroads towards the town of Lacin, which borders Armenia and is the main gateway via which Armenia re-supplies the region of Karabakh with armaments and supplies necessary to maintain control of the region.

Lacin and Shusha together are two of the most strategically important areas in the Karabakh region, says Rusif Huseynov, a foreign policy expert and director of Baku-based think tank Topchubashov Center.

“The former [Lacin] is an overland bridge connecting Armenia and Nagorno-Karabakh, while the latter [Shusha] is a strategic height from where one could keep all Nagorno-Karabakh under control,” says Huseynov speaking to TRT World.

The current flare-up in fighting is the most serious fighting between Armenia and Azerbaijan since they fought a lengthy war between 1988 and 1994 resulting in a heavy human toll.

The agreed ceasefire was meant to give way to a political solution. Since then however, the conflict froze and Armenia moved to entrench its presence on the ground through demographic engineering.

Baku’s significant advances in Karabakh has surprised many, who firstly didn’t expect the conflict to last this long or to see Azerbaijan regaining crucial parcels of territory that it had not controlled since the 1994 ceasefire.

The Azerbaijani government has moved swiftly to exert control over the region announcing “temporary special administration in the liberated territories” which border Iran.

The decree states that securing public infrastructure and gathering information left behind in the region will be the top priorities as Baku seeks to consolidate its gains.

“The success of the Shusha operation could also inflict severe damages to the resistance of the Armenian forces. For Azerbaijanis, Shusha is the embodiment of Karabakh, its soul,” says Mammadov.

“Timely success in Shusha will also equip Baku with the upper-hand at the negotiation table with the adversary, provided, of course, if the Armenian side opts for the negotiation,” he added.

Politically for Baku it would be essential to capture one or both of these two towns. Internally the strong emotions that the latest conflict has evoked will be difficult to placate without a significant victory.

Externally, Azerbaijan's hand at the negotiating table would be strengthened and likely force Armenia to make compromises it would not have previously countenanced.

“Both Lachin and Shusha are game-changers and capturing at least one of them means an important turn in the course of the war, capturing both would automatically end the conflict,” says Huseynov.

As the war is unfolding in Karabakh the Foreign Ministers of Armenia and Azerbaijan, Zohrab Mnatsakanyan and Jeyhun Bayramov are having a face to face meeting in Geneva.

With three broken ceasefire attempts behind them, it will be difficult to see what the meeting will achieve in particular with Azerbaijan having the upper-hand on the battlefield.

After the “stubborn and meaningless resistance of the Armenian leadership” to negotiations in the past, says Huseynov “Azerbaijan seems now to pursue a maximalist position: to liberate all the occupied territories or at least the Lachin corridor and Shusha.”

“Under a blockade, the Nagorno-Karabakh secessionist forces will have no chance and Azerbaijani control over Lachin would make their survival impossible.”