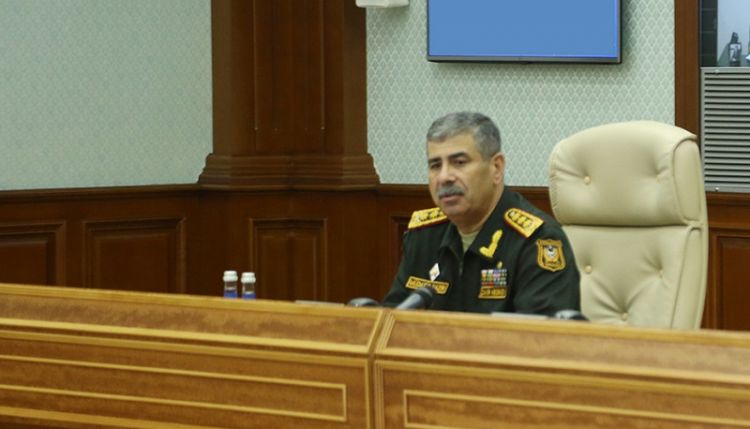 On March 29, Azerbaijani Defense Minister, Colonel General Zakir Hasanov held an official meeting with the Deputies of the Minister of Defense, Commanders of types of troops, Chiefs of Main Departments, Departments and Services of the Ministry at the Central Command Post. Commanders of the Army Corps and formations stationed in the liberated territories, as well as other officers, were also involved in the meeting via video communication, Eurasia Diary reports citing News.az.

Touching upon the organization of military service in the liberated territories, the minister conveyed the instructions of Azerbaijani President, Supreme Commander-in-Chief of the Armed Forces Ilham Aliyev, and forthcoming tasks, the Defense Ministry said on Monday.

Minister Hasanov instructed to focus on improving the level of training of military personnel and the combat capability of units on improving the quality of combat training classes conducted in military units, in particular, in units deployed in the liberated territories considering the experience gained during the Patriotic War.

He stressed the importance of ensuring the safety and preserving the health of the military personnel of the Azerbaijan Army, increasing its moral-psychological training, as well as strengthening military discipline.

Minister Hasanov gave specific instructions for the development of the military infrastructure in the liberated territories, carrying out engineering work and activities on engineering support of troops, increasing the vigilance of servicemen who are taking combat duty, as well as further improving the logistics support and supply of military units.