Aliyev told me that he was ready to restore Karabakh and boost Armenia. - Lukashenko | Eurasia Diary - ednews.net

Aliyev told me that he was ready to restore Karabakh and boost Armenia. - Lukashenko 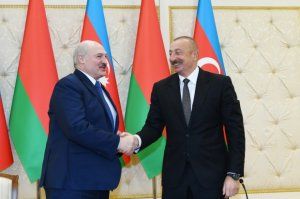 'We sincerely welcome the agreement on a complete cessation of hostilities in the zone of the Nagorno-Karabakh conflict. This is an important political decision that should form the basis of lasting peace in the region. I want to congratulate the people of Azerbaijan and the people of Armenia on the end of this terrible tragedy, which lasted 30 years.' As reported by the Belarus 1 TV channel, this was stated by President of Belarus Alexander Lukashenko following the negotiations with President of Azerbaijan Ilham Aliyev.

The Belarusian leader also spoke about Baku's attempts to peacefully settle the conflict in Nagorno-Karabakh with Armenia.

'Of course, when I am no longer president, I will tell a lot of good things about what Ilham Aliyev proposed to the Armenian people and the leaders of Armenia in order to resolve this conflict. One of the suggestions when he said to me: "Listen, tell the Armenians, you are on good terms with them, I am ready to restore not only Karabakh, but also to boost Armenia." When there was oil price of $100, you told me (addressing Ilham Aliyev - Ed): "I don't even name the amount that I'm ready to pay right away. Tell them to settle this issue peacefully,' said Lukashenko.

Then Alexander Lukashenko addressed a question to Ilham Aliyev: 'Do you mind that I am talking about this?' Ilham Aliyev laughed: 'Now you can say everything you want. You have already said everything.'