The refusal of Kocharyan-Sargsyan blocs to recognize results of elections is tactical character - Expert
Read: 394

Friendship and brotherhood between Azerbaijan and Turkey nations are our greatest wealth - Parliament Speaker
Read: 264

Common understanding is impossible between US and Iran during presidency of Raeisi - Expert
Read: 213

Without the support of NATO, the UK cannot give a serious response to Russian strike - Expert
Read: 195

Cooperation and security without dividing lines is a common goal of countries - Putin
Read: 193 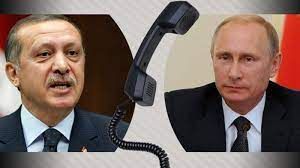 Turkish President Recep Tayyip Erdogan and his Russian counterpart Vladimir Putin discussed situation in Jerusalem and the general environment in the zone of the Arab-Israeli conflict in a phone conversation on Wednesday, the NTV channel reported.
The Turkish president pointed out that a "similar stance of Turkey and Russia on the issue [of status] of Jerusalem is an important message" in the context of resolving this issue. He noted the importance of statements by the Russian Foreign Ministry regarding settling the Jerusalem problem based on UN decisions and the two-state.